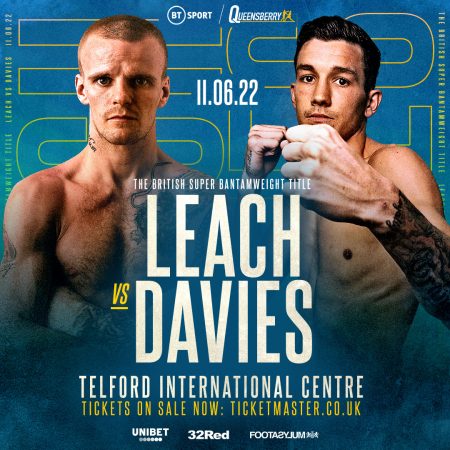 The British super bantamweight champion Marc Leach has stated that he takes special satisfaction from knocking young unbeaten hopefuls off their TV perch.

After a career spent largely flying under the radar, the highly skilled Salford native made people sit up and take notice in October 2020 when he comfortably defeated the unbeaten 2016 Olympian Qais Ashfaq in what was billed a final eliminator for a shot at the Lonsdale belt.

Leach was subsequently forced into another final eliminator against Thomas Essomba in June 2021 before being put forward to do battle with the undefeated Londoner Chris Bourke at York Hall for the vacant title in March.

The big punching Bourke was viewed as the form horse going into the fight but Leach told anyone who would listen that he would be too elusive and technical for his TV-backed opponent.

Now Leach is set to defend his cherished title against another unbeaten fighter in Liam Davies in Telford on June 11 and reckons that inflicting a first defeat on a fancied fighter, who has been given all the advantages, makes winning all the more pleasing.

“Yeah, definitely,” said the 28-year-old with an 18-1-1 record. “Most of them are very sugar-coated, have had the easy fights and been on the big platforms. Whereas I have done it the hard way, fought for free, been out of pocket and not been on TV shows all the time.

“It is getting to the stage now where I’m fighting these up and coming prospects, or so they say. But there are more of me all around the world who haven’t got the opportunity.

“I’m just thankful and grateful that I’ve got this opportunity. I’m just gonna keep pushing on now and taking the ‘0’ of whoever is in my way.”

Marc Leach will defend his British super bantamweight title against Liam Davies on a big night of title action at the Telford International Centre on Saturday June 11, live on BT Sport. Tickets for the show are on sale now, available from Ticketmaster.co.uk. 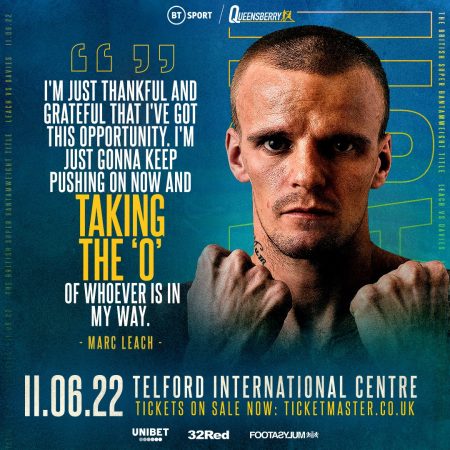