1-0 Bradley Thompson returns to the ring this Sunday in Walsall, England 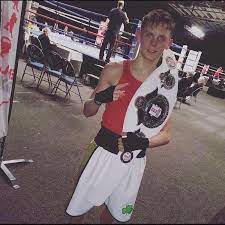 Bradley Thompson can feel his ‘man strength’ coming through after leaving his teenage years behind him ahead of fight night.

He’s set for action in the Stadium Suite at Walsall FC’s the Banks’s Stadium, on the Sunday afternoon of November 14, as part of a show staged by BCB Promotions.

After turning 20 in September, the promising flyweight is looking to build on his impressive pro debut back nearly six months ago.

Thompson first punched for pay by removing Steven Maguire by TKO in the fourth and last round of his paid bow. That fight took place in a wet car park at the Sheffield Arena, but the Shropshire starlet will be closer to home on this occasion.

Thompson, who is from Donnington in Telford, was a much-vaunted amateur prodigy, so big things are expected of him in the pro game.

He was a three-time national amateur champion and boxed for England at junior and youth level, winning a silver medal at the 2017 Junior Three Nations tournament.

Boxing is definitely in the family for Thompson, whose older brother Liam is the reigning English bantamweight boss and another formidable former amateur.

They are second-generation fighters, with dad Tristan having previously claimed the Midlands lightweight belt, as a pro, and now serves as their coach.

Thompson’s debut was a year in the making, having previously been scheduled to take place at the Oakengates Theatre before the Coronavirus crisis took hold.

He said: “I’d have loved to have made my debut in Telford, it was a bitter pill to swallow but there was, obviously, bigger things going on with the pandemic.

“It took me another year to fight and I didn’t know what to expect. With it being outdoors, the one thing you don’t want is rain and that’s exactly what happened!

“The canvas was soaked, I had to restrict what I was doing so I didn’t slip and end up taking a count but, by the fourth round, I was growing into it.

“I knew what shots were landing on him and when I started putting them together, the referee had seen enough. From that perspective, it was a good debut.

“There was even a little ring rust, because I hadn’t boxed in a while, but I shook those bits off and it will stand me in good stead for the next one.

“I’ve got a lot more man strength, over that time, but I can still make flyweight comfortably. We want everything we can out of the division.

“Liam has got the English title and, as a family, we want to build up a good collection of belts. He had to do his apprenticeship, as a pro, and I’ll go through the same.

“It’s a bit different for me, as a flyweight, as there are only eight ranked fighters at national level. Opportunities can come along at English, British and even world level very quickly.

“It’s that leap to stardom that you have to work towards and this is another step along the way. Liam has shown me how it can be done.”

Tickets for the Stadium Suite bill are on sale, priced at £40 standard or £75 VIP ringside with buffet, and can be purchased directly from the boxers or by visiting myfighttickets.com.