1-0 Hannah Baggaley has second bout this Sunday in Birmingham 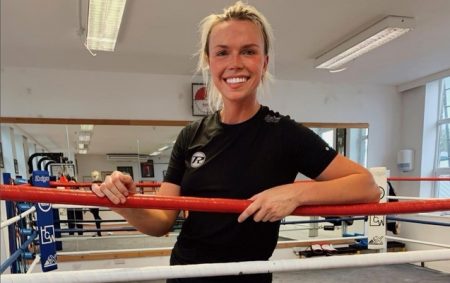 Hannah Baggaley will continue to take no prisoners in the ring as her fairytale story starts to gather pace.

She’s aiming to strike again at the H Suite in Edgbaston, Birmingham, on the Sunday afternoon of December 19, as part of a show staged by BCB Promotions.

‘The Hurricane’ is looking to sweep away all of those before her in the super welterweight division, where she’s already registered a knockout blow.

Her pro debut, in September, saw her blow away the normally-durable Borislava Goranova, inside two rounds, through a brutal finish.

Baggaley’s overhand right did all of the damage, wobbling Goranova enough that she was put down with a follow-up left hook.

Referee Kieran McCann called for the finish, meaning that a TKO instead of a knockout was registered. While a bone of contention, Baggaley remains pleased with her night’s work.

It was enough to attract the attention of Frank Warren, who has tied her to a deal with his Queensbury Promotions stable. His nephew, Alfie Warren, is serving as manager.

As to further affirm her dedication to success, Baggaley has now relocated to Manchester from her hometown of Blackpool, having previously lived in Australia.

Most of his year has been spent under the tutelage of Anthony Farnell, after initially being trained by former British champion Matty Askin for the pro ranks.

Baggaley has endured a series of call-offs to be introduced into the pro game and to secure her second contest, which now takes place under the BCB banner.

She said: “It felt like a long road, just to make my pro debut, but I felt like I made a statement, by knocking the girl out, literally in front of the Warrens!

“I don’t think some of them knew anything about me, before those punches hit, but it seemed to have an effect, as they’ve signed me up now.

“Alfie, Frank’s nephew, is managing me and he’s been great so far and I think I can do amazing things, with Queensbury Promotions behind me.

“I was due to box at York Hall (London) the day before, but the show got called off. I trust that my team will do the right thing and they got me this date, 24 hours later, in Birmingham.

“I’m all in with boxing, I gave up my life in Australia and came back to England for it. I had residency, I was living in Sydney, working as a painter and decorator. Everything was fine.

“There was just that burning desire, inside of me, to come back and make a go of boxing, I made that move and I can only see where that will take me.

“When I was younger, I was a bit of a troubled teen and I could be very naughty. I was steered towards anger management and boxing proved to be the perfect outlet for me.

“I’ve not got any real amateur experience, but I had a fair few at white collar (unlicensed) level and I know what boxing on the road is all about.

“I really feel like I’ve come on since I started working with Arnie (Anthony Farnell, coach) and there’s no substitute for being settled in the gym, every day, working on my skills.

“I’ve been dying to fight, so that’s going to be dangerous for my opponent. I’m like a little pitbull, who’s going to be let off the leash and wants to let it all out.”

Tickets for the H Suite bill are available now, priced at £40 standard or £75 VIP ringside with buffet, directly from the boxers or by visiting myfighttickets.com.