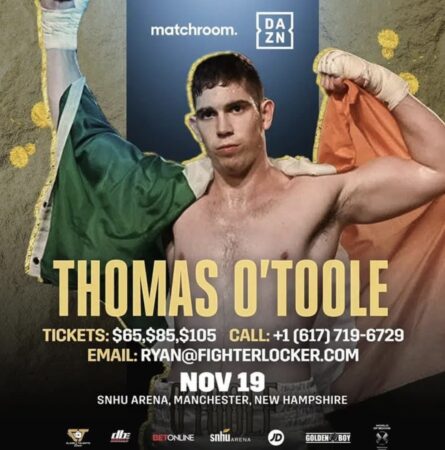 The 23-year-old O’Toole (1-0, 1 KO), fighting out of Galway, Ireland, is so excited to fight on this high-profile event, headlined by his countryman Jason Quigley’s (19-1, 14 KOs), of Ballybofey, challenging undefeated WBO Middleweight World Champion Demetrious “Boo Boo” Andrade (30-0, 18 KOs), that he will be missing his graduation from Galway-Mayo Institute of Technology scheduled the same day as his fight.

“This fight means the world for me,” O’Toole said. “Matchroom is the biggest and best platform in boxing. I can’t wait to showcase my skills. I’ve never met Jason, but he did comment on my performance in the Irish Elite Championships, so I’m pretty sure he knows me. We’re going to take over the 19th with all the Irish boxing fans from Boston and New England there supporting us.”

O’Toole won his pro debut this past September 25th in the Boston suburb of Dedham, in which he knocked down Francisco Ariri Neto three times for a spectacular first-round knockout. On Nov. 19, O’Toole is matched against Texan Mark Malone (1-0) in a 4-round bout.

“I’m excited for Thomas fighting on this stage,” manager Roach commented,” Roach commented. “Matchroom and DAZN is the biggest platform in boxing right now. I’m hoping they like what they see, and we can get a deal done. Thomas is a very special fighter and this is the opportunity he’s been waiting for his entire life. He’s ready for it!”