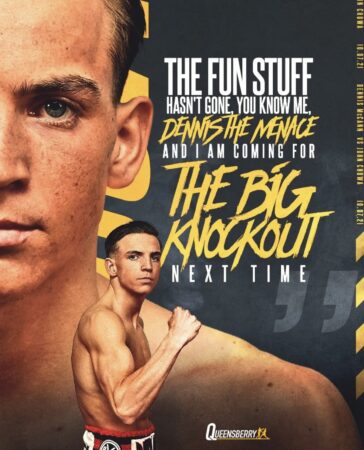 McCann is widely-regarded as one of the very best prospects in all of world boxing, having compiled an undefeated record of 10-0 in his professional career so far.

Six of those ten victories have come by stoppage, with the most recent of those coming in July, when he needed less than two rounds to knock out John Chuwa.

At just 20-years-old, McCann has already had incredible success inside the ring, and ‘The Menace’ looks destined for huge things in the sport.

In signing a long-term partnership with the premier fight sports and fitness brand, the athletes will use Everlast equipment and wear the new Greatness sportswear range. Battle-tested in one of the toughest athletic environments, Everlast products have been imagined by a hundred years in the gym, designed and engineered to empower your best self.

They exemplify Everlast’s values of authenticity and dedication, as we champion brave individuality, seeking out people and partners who express themselves boldly and creatively.

Commenting on the partnership, McCann said: “Teaming up with Everlast is a dream come true. After years of dedication to try and get to the top of my game, it shows that hard work pays off by having a worldwide giant like them on board.

“I’m still only 20-years-old so have my whole career ahead of me, so I’m delighted that Everlast will be alongside me every step of the way as I look to achieve my dream of becoming world champion.”

Chris Zoller, Everlast’s VP of Marketing and Product Development, added: “We are proud to welcome Dennis McCann to the team. There isn’t a prospect in the world with as bright a future as him, and it’s a real coup to have him join team Everlast.

“He brings excitement every time he steps into the ring, and we’re looking forward to seeing what heights he can reach in his professional career.

McCann made his professional debut at the Lamex Stadium in Stevenage back in May 2019, and displayed his massive power from the off, dropping Kamil Jaworek twice on his way to a first round stoppage win, needing just 104 seconds to get the job done.

Four more fights followed during the rest of 2019, with three of them ending in stoppage, before he kicked off 2020 with a points victory over Pablo Narvaez.

Another impressive victory then occurred when McCann became just the second man to stop Brett Fidoe in 85 professional fights when they met in August 2020.

He then showed that he possesses more than just power when he competed in fights against Pedro Matos and Luis Moreno, with both of those going the eight-round distance, allowing McCann to utilise all of his excellent boxing skills.

His fast-paced career has seen him compete in a number of iconic venues across the UK, including the O2 Arena, the Royal Albert Hall, York Hall, and Falls Park.

Everlast and its users share an inner and outer strength. It is for those with a strong sense of self and commitment in whatever they do, in both athletic and non-athletic endeavours. Everlast supports the individual spirit that drives uniqueness and greatness within each of us.

Shop the Everlast collection as worn by #TeamEverlast fighters, at www.sportsdirect.com/everlast.