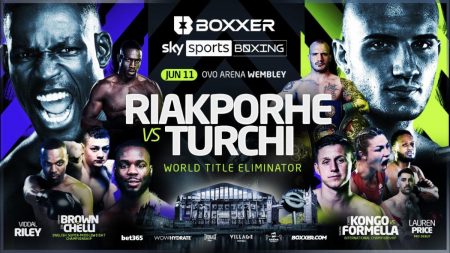 Full steam ahead for ‘The Midnight Train’ Richard Riakporhe as he returns to action at the OVO Arena, Wembley on this Saturday, June 11, live and exclusive on Sky Sports, to take on Italy’s Fabio Turchi in an eliminator battle which will see the winner move up the cruiserweight rankings and in prime position to challenge reigning champion Maris Breidis later this year.

With Riakporhe (14-0, 10 KO’s) coming off a stunning knockout victory over Deion Jumah in March and former IBF International Cruiserweight champion Turchi (20-1, 14 KO’s) having a 66% stoppage rate in his victories, this fight matches two proven finishers and promises action from the very start as both men look to score the knockout which will move them on to world championship opportunity.

Kongo is raring to get back into pole position after winning his comeback fight against Kelvin Dotel in March following his close points loss to Michael McKinson last year.  While Formella is looking for his own shot at the World title and his only two losses have been against Former World Champion Shawn Porter and Connor Benn, pushing both big hitters the distance.

The two Londoners will both be going into this fight totally confident of victory and certain to put on an eye-catching performance in a 50-50 fight which will delight the nation’s boxing fans and looks set to steal the show.

One of the most highly-touted amateurs in women’s boxing, Price earned the amateur sport’s supreme honour when she won gold last summer. She was subsequently awarded an MBE in recognition of this stunning success.

She now looks destined to reach the very highest level of the professional sport in the exciting and fast-moving world of women’s boxing, with the first step towards that greatness coming on June 11.

Cruiserweight star Viddal Riley (5-0-0, 2 KO’s) fights in his home city for the first time in his pro career. The Hackney sensation made his pro-debut in November 2018 with a first round KO of Julio Manuel Gonzalez in Mexico and has since fought in Las Vegas (twice) and Dubai.

Last time out he was on the huge Amir Khan-Kell Brook undercard in Manchester in February registering a six-round points win over Willbeforce Shihepo via a first round knockdown and aims to showcase his power and skill in front of the London fans.

“I’m ready to continue my assault on the cruiserweight division. The Midnight Train is on an unstoppable roll and Turchi is the next man tied to the tracks in front of me. He’s a good boxer and I’m expecting a tough fight but nothing I can’t handle. I’m coming out of this one with the win and stepping up into world title contention,” said Riakporhe.

“I am very happy to have this opportunity. Since I was a kid I always dreamed of fighting at the international level and in an important venue like this. I’m dedicating my body and soul to get into the best shape and have a great match against Riakporhe who I think is an excellent boxer,” said Turchi.

“Richard Riakporhe has been on an unstoppable rise to world title contention and now he’s potentially within touching distance of getting his shot at gold. Turchi is the former IBF International Champion and brings heavy firepower to the ring. This is Riakporhe’s toughest career challenge to date and a win here will make a strong statement about his potential to be world champion,” said Ben Shalom, BOXXER Founder and CEO.

“The English Super-Middleweight Title showdown between Zak Chelli and Germaine Brown is a fight which every boxing fan in the country will be glued to. It’s impressive that they are willing to fight each other at this stage and lay it all on the line. Don’t be surprised if this is a Fight Of The Year contender.

“Finally, the professional debut of Lauren Price. Olympic gold medalist, MBE – there aren’t many athletes in any sport who have those kind of credentials and we’re proud to be sharing her professional journey and being part of her rise to the top.”

Adam Smith, Head of Boxing Development at Sky Sports, said, “This is shaping up to be a fantastic card. I’m looking forward to seeing ‘The Midnight Train’ Riakporhe roll back into Wembley after that excellent win over Jumah. Another big test awaits as he faces the tough and classy Turchi.

“The fight between Chelli and Brown is a really good match. We’ve seen some absolutely cracking fights in the English title matches, those fights just seem to deliver incredible action, and this is a 50-50 pick ’em.

“I’m also really excited to see Lauren Price begin her professional journey. She was a standout amateur and achieved so much for the sport, everyone at Sky Sports is very proud to have her with us and we can’t wait to see her achieve equally huge things in the pro ranks.”