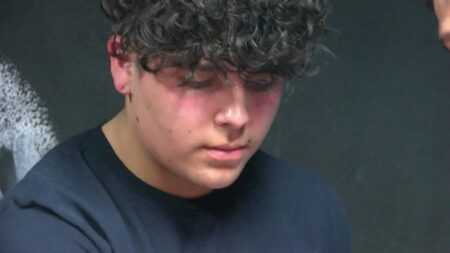 While countless high school juniors concern themselves with standardized test scores and submitting college applications, Johnny “Nicco” Tapia, the youngest son and namesake of the late five-time world champion, will commence his pursuit of a pro boxing career when he makes his amateur debut on the preliminary portion of his Mom Teresa’s Marco Antonio Barrera vs. Daniel Ponce de Leon pay-per-view fight card Saturday, Nov. 20, 2021.

“Boxing is a passion,” said the 16-year-old currently working toward earning his diploma online. “I love stepping into the ring, getting hit, and feeling the crowd’s energy.”

In the Nov. 20 main event, two Mexican boxing legends will lace up the gloves for one final night when Hall of Famer Marco Antonio Barrera (67-7, 44 KOs) returns to the ring for only the second time in more than a decade to square off against former two-time world champion Daniel Ponce de Leon (45-7, 35 KOs). The six-round super welterweight exhibition and four additional bouts will air live on pay per view from Inn of the Mountain Gods Resort & Casino in Mescalero, New Mexico.

A native of Las Cruces, N.M., Nicco trains in the Tapia home garage, enjoys studying sociology to “look at people from a different perspective,” dislikes mathematics, and currently has no plans to further an academic career following his 2023 graduation.

“I don’t really plan to go to college,” said the music fan who freestyle raps in his downtime. “I want to keep pushing myself in the ring and turn pro as soon as I get enough experience.”

Surrounded by the sweet science from an early age, Nicco fondly looks back on innumerable heartwarming memories of watching his father train for upcoming fights.

“I used to go to the gym and run around with my Dad every day. When the bell rang, I held up the gloves with him.”

Outside of boxing, the father-son pairing spent quality time playing other sports, enjoying delicious desserts, and tuning into their favorite television programs.

“We used to go to the park, play basketball, and jump on the trampoline,” Nicco recalled. “Dad used to give me ice cream sandwiches. I remember going into his room and watching the show ‘Cops’ together.”

“I study his speed, head movement, and angles,” said the teenager who models much of his fighting style after his Dad and Marvelous Marvin Hagler.

“The crowd was wild and crazy,” Nicco recollected. “I love studying my Dad’s boxing technique.”

Originally scheduled to fight at Inn of the Mountain Gods on July 31, 2021, the aspiring actor and former viola player pulled out of his amateur debut when he sustained a hand fracture.

“I was playing football with friends and landed on my hand wrong,” lamented the proud holder of a driver’s license. “It was the first time I injured myself.”

Less than four months later, Nicco is eager to thrill the Mescalero crowd on Nov. 20 before Barrera and De Leon take center stage.

“I am ticking off the days and can’t wait for this night to come.”

A Spanish-language broadcast will be available as a viewing option for both the pay-per-view and preliminary bouts.

Those hoping to attend the unforgettable, 10-fight Tapia Promotions extravaganza in person can purchase tickets starting at $75 through innofthemountaingods.com and  TicketMaster.com by searching “La Ultima Batalla – The Last Stand.”