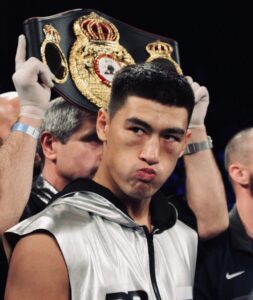 Dmitry Bivol is one of today’s most fearsome fighters. The World Boxing Association (WBA) Light Heavyweight Super Champion was unable to enter the ring during the eventful 2020 but was always on the attention of the press and fans because of his quest for great fights.

The Kyrgyzstan-born Russian fighter is expected to return in 2021 to fight in the United States against big-name opponents, and his media attention will grow as he keeps fighting.

It has been more than a year since he last defended his black and gold belt in October 2019 against Dominican Lenin Castillo. Bivol is the 175-pound Super Champion, and as such, he intends to challenge the best in the division; however, he has stated that he is willing to change divisions if one of the big names fighting in the nearby weight categories is willing to take him on.

His boxing style is remarkable for his strength and the concentration he exhibits in each of his fights. He is organized, does not waste punches and has an incredible precision that gives his opponents very few opportunities.

He is WBA champion since May 2016 and has made five defenses of the title, in addition to two exhibitions when he was interim champion. The American market already knows him and what he is capable of, the only thing left is to take great challenges like Artur Beterbiev or other great names to continue shining.