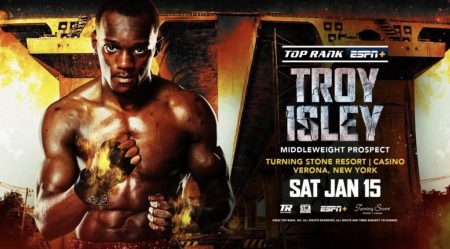 The last two years have been quite the rollercoaster for 2020 Olympian Troy Isley (Alexandria, Va.). He dealt with two shoulder surgeries and the loss of his Olympic dream amidst the challenges of the pandemic in 2020 before returning to the ring for three professional bouts and an unprecedented appearance in the Olympic Games in 2021.

Isley made the move back to the amateur ranks between his second and third professional fights to compete in the 2021 Olympics in Tokyo, winning stoppage victories in both bouts in the paid ranks. With the turbulence of the last two years behind him, Isley is fully focused on the next chapter of his career.

He will open 2022 in his first six rounder against Harry Keenan Cruz Cubano (6-2, 1 KO) this Saturday at the Turning Stone Resort and Casino in Verona, N.Y. Isley has been preparing for his fourth professional fight in Las Vegas with his coach Kay Koroma and several other young prospects, including Kenneth Sims, Jr., and stablemate Bruce Carrington.

“My opponent is tough. He’s going to take risks. He’s pretty wild,” Isley said. “I feel like I’m better than this guy and whatever he can do, I can do better. You’re going to see big things from me in 2022. Fans are going to see my overall skill set and more boxing rather than me just coming forward and banging all the time.”

In addition to his lifelong trainer, known to most as “Coach Kay”, multi-time Olympic coach Al Mitchell is sharing his extensive knowledge with Isley. The 23-year-old has even spent weeks in Marquette, Mich., with the highly decorated coach learning from his old school techniques. Mitchell participated in the last two weeks of Isley’s Las Vegas training camp before the trio traveled east to Verona on Tuesday for the fight week festivities.

Isley’s bout will highlight the undercard of the Joe Smith-Steve Geffrard WBO title bout on Saturday, January 15 at the Turning Stone Resort & Casino in Verona, N.Y. Undercard action is slated to begin at 6:30 p.m. ET/4:30 p.m. on ESPN+.