2021 The Year of Boxing: 5 Years Since the Second Women’s Convention 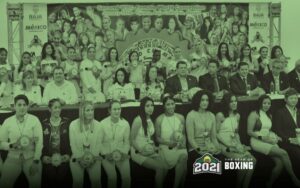 It has been five years since that morning, when the President of the WBC, Mr. Mauricio Sulaiman and Lonnie Ali, Muhammad Ali’s wife, inaugurated the second Women`s World Convention, at the Gran Hotel in Tijuana, Baja California.

That time, the great hall was illuminated with the presence of dozens of boxers from all over the world who with their great enthusiasm made this second edition of the Convention a unique and unforgettable event.

As we all know, twenty years ago boxing was not broadcast on open television as it is today, neither male, and much less female boxing. All the fights were presented in pay-per-view and, at that time, women’s boxing was hardly known; the governing bodies did not consider women’s boxing at all.

In recent years, promoters and sports experts have opted for cards featuring women; an evolution that has taken place gradually.  Some may think that even slowly, but it has really been worth it because of support, and more promotion that is being given to female boxers, which is now a reality.

For the WBC it has been a priority to take women’s boxing to the top and give it all the support. Proof of this was the celebration of the first women’s Convention organized by the WBC, which took place in September 2014 in Playa del Carmen, the beginning of a unique event thought of them and for them. A dream of our President  for life José Sulaimán that his son Mauricio, crystallized in a unique way.

Since then, the WBC set a precedent and every two years this great event has been held which brings together great stars of women’s boxing with the aim of providing guidelines in order to  boost, promote and improve women´s boxing development.

So far, we have held three Conventions. The first happened in Playa del Carmen (2014), the second in Tijuana (2016), the land of our first WBC world champion, Jackie Nava, and the third  one in 2018 in Manila, Philippines.

Moneo vs. Alaniz This Saturday for the WBA-Fedelatin Lightweight Title Pierce O’Leary: Sparring Josh Kelly Has Been Great Preparation