23 Contests On The Opening Day Of The Asian Boxing Championships 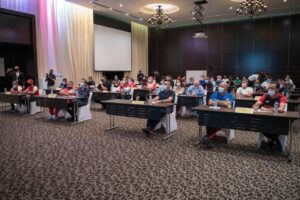 The Technical Meeting, the Official Draw and the Opening Ceremony were held at the ASBC Asian Men’s & Women’s Elite Boxing Championships in Dubai, United Arab Emirates today where Mr. Walid Jarrar of Jordan is the Technical Delegate. The competition will start from 6pm on Monday with 23 contests.

All of the events before the start took place in the Le Meridien Hotel and the busy day was closed by a Grand Opening Ceremony, which was attended by AIBA President Mr. Umar Kremlev and AIBA Secretary General Mr. Istvan Kovacs.

Altogether 150 boxers will compete for the 20 gold medals in Dubai where Kuwait will make its debut in women’s boxing continuing the Gender Equality Program. India, Kazakhstan and Uzbekistan sent maximum number of 20 boxers to the competitions.

Sri Lanka vs. Mongolia in the first contest of the whole event

The first preliminary contest in the men’s light flyweight (49kg) and at the whole ASBC Asian Men’s & Women’s Elite Boxing Championships will be held between Sri Lanka’s Sajeewa Nuwan and Mongolia’s Unubold Orkhontungalag. The Sri Lankan boxer is more experienced on the international stage but the seven-years younger Mongolian is one of our native talents in the sport who can make a real breakthrough in Dubai.

Kazakhstan sent their best male line-ups to Dubai and among them a fantastic young star can start their big march among the elite boxers. Two-time ASBC Asian Youth Champion Makhmud Sabyrkhan was fantastic at his first elite tournaments and the 19-year-old talent will be making his debut at the bantamweight (56kg). His first opponent will be a top Indian, Commonwealth Games bronze medallist Mohammed Hussamuddin. The fight could be one of the most exciting contests of the first day.

Kazakhstan’s former ASBC Asian Youth Champion Serik Temirzhanov was involved to the elite national team after his hard work in the end of 2019 and represents the country in the lightweight (60kg) in Dubai. The 23-year-old Pavlodar-based boxer will have an excellent opponent as first, Iran’s young talent Daniyal Shakhbakhsh who has excellent technical skills. The main preliminary contest in the light welterweight (64kg) will be held between India’s former ASBC Asian Champion Shiva Thapa and Kyrgyzstan’s Dmitriy Puchnin who won the best boxer trophy in their last National Championships.