24-0 Brandun Lee stuns Juan Heraldez in the 7th round 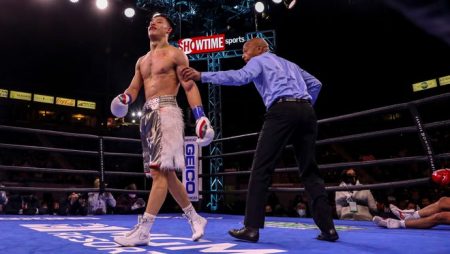 “I have to watch the fight back, but my dad (trainer Bobby Lee) didn’t like my performance,” said Lee. “He’s a perfectionist. Everyone here thought I would take Juan out earlier, but I wanted to show everyone I can box.”

The 22-year-old was impressive from the outset, landing a powerful, stunning overhand right on Heraldez in round one that set the tone for the rest of the fight. Heraldez was able to have moments of success with counter-left hooks and attempted to keep the powerful Lee away from him with jabs, throwing 129 throughout the fight.

After several closer rounds following the first, Lee began to pick up the pace again in round five, mixing in a body attack that quickly opened up Heraldez’s head for more power punches. By round seven, Lee had complete control of the bout and was able to land the decisive blow, distracting Heraldez with a left hand before firing the straight right hand that put Heraldez down.

“I kept seeing that Juan was moving to his right and my right hand was coming up short,” said Lee. “So I knew I had to jab and box him and make him forget about that right hand. Then I made the adjustment in the seventh round and got him out of there.”

Referee Gerard White eventually waved off the count, halting the contest at 2:11 into the seventh round. This victory marked 15 consecutive knockouts for Lee as he continues his rise toward a possible world title shot.

“I’m ready for anyone,” said Lee. “It’s ultimately up to my team, but I say bring them on.”