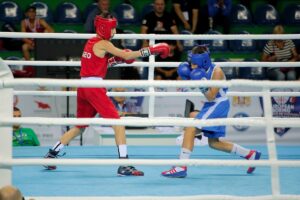 The EUBC Schoolboys & Schoolgirls European Boxing Championships is the next highlight of the boxing schedule which takes place in Sarajevo, Bosnia & Herzegovina starting from 12th of August. After 20 years of break the European boxing event returns to the country. Thirteen schoolgirls and sixteen schoolboys will earn their first European titles during the finals at the Sort Hall East Sarajevo on 20th of August.

25 nations from all regions of the continent are participating in the event including:

The management of the European Boxing Confederation was not able to schedule the schoolgirls and schoolboys event in 2020 due to the Covid-19 pandemic but it returns to the boxing calendar after two years of break. The last 2019 edition of the EUBC Schoolboys & Schoolgirls European Boxing Championships was held in Tbilisi, Georgia.

Sarajevo hosted the 2001 edition of the European Junior Boxing Championships for 17- and 18-year-old boxers and after 20 years of break one of the continental events returns to the country. Bosnia & Herzegovina hosts international tournaments for elite and youth boxers every year but this continental event will be the first ever for schoolgirls and schoolboys.

The schedule of the EUBC Schoolboys & Schoolgirls European Boxing Championships

August 10-11 – Arrival of the delegations

August 19 – Day7 competition with the semi-finals

August 20 – Day8 competition with the finals

August 21 – Departure of the delegations

Maestre-Fox declared a no-contest & WBA Interim Title declared vacant Reece Bellotti: The pressure is all on him

International boxing tournament to be held in Mongolia