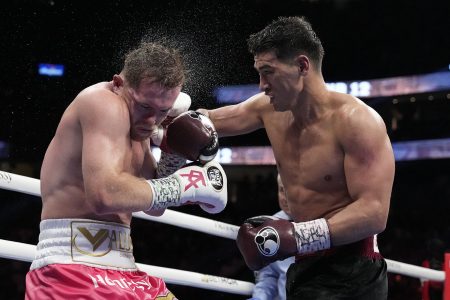 5-1 underdog Dmitry Bivol showed the world why he is the champ on Saturday night with one of the most spectacular fights of his career against Saul “Canelo” Alvarez. The WBA Light Heavyweight Super Champion retained his crown in a dominant performance over the Mexican at the T-Mobile Arena in Las Vegas.

All three judges scored 115-113 scorecards for Bivol to remain the 175-pound champion of the pioneer organization and also undefeated in his career.

The Russian did the job he set out to do and annulled his challenger in a very strategic fight in which he grew as the rounds went by. A perfectly closed guard, good movement in the ring and taking advantage of his height and reach were the key elements for the victory.

Bivol worked well with his straight punches and gained confidence to start throwing combinations with power punches and hurt a Canelo who could not counter attack the champion’s style despite trying to do so from the beginning.

In fact, Bivol finished the fight very well, taking the initiative and commanding the ring in a demonstration of confidence and security.

The 175-pound champion left open the possibility of a rematch for the challenger, who intends to face him again. It was a fight full of action.

After the fight, Canelo stated “I don’t think I lost the fight. I lost a few rounds, but I didn’t lose the fight. I felt good to be honest, maybe a little tired over the last few rounds but that’s because of the weight.”

“I’m looking for the difficult fights, I want to make history.

“He won four or five rounds, not more than that.”