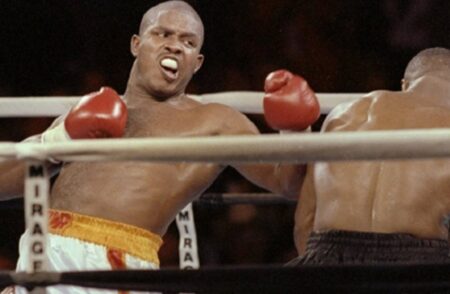 The latest ‘senior’ fighter to seemingly be back and ready to fight is the former top heavyweight from the 80’s and 90’s, Donovan “Razor” Ruddock.

Ruddock, now 57 (40-6-1, 30 KOs), who in the past has traded punches with the divisions best, shared the ring twice with a still rampaging Mike Tyson. He lost their first bout by controversial stoppage in 1991 and again losing by unanimous decision the same year. In both bouts he was more than competitive, gallantly engaging war with “Iron” Mike.

His goal is to become the oldest heavyweight champion in heavyweight history, the current record held by George Foreman who regained the title at the grand age of 46.

Ruddock retired in 2001, only to make a comeback in 2015. He was successful in two bouts against modest opposition before being knocked out by Dillon Carman for the Canadian heavyweight title. All three bouts took place in 2015. Ruddock had blamed the loss to Carmen with rabbit punching during the bout the reason.

Setting his sights high, Ruddock is wanting a bout against the 42 year-old current Cuban heavyweight contender Luis Ortiz (32-2, 27 KOs) and he claims to be in the best shape ever, even at his advanced age.

Now based in the U.S, I’m sure there will be a state there that would sanction a bout involving Ruddock, having seen Evander Holyfield recently approved for a professional bout, only for the decision to be reversed.

This is now a worrying trend for aged fighters to come out of retirement for one last hurrah. But further nesting the retirement fund to some is too much a temptation, whether it be an exhibition bout or as is desired by Ruddock, a professional bout.

It is just a matter of time before an accident happens and is sad to see a former fighter of Ruddock’s stature lured back by the dollar sign. Sadly he wont be the only one, there are I’m sure, many more ‘senior’ boxers licking their lips at the thought of one more payday.