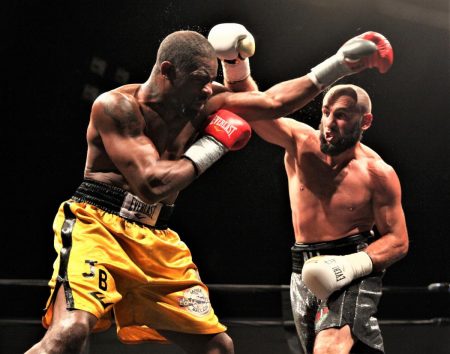 On Friday, January 7, 2022, power-punching WBC #13 and WBO #14 light heavyweight contender Ali Izmailov will return to action in a tough match-up against transplanted Panamanian veteran Israel Duffus on the untelevised undercard of the ShoBox: The New Generation 2022 kickoff episode (9 p.m. ET/PT) from the Caribe Royale Resort in Orlando, Fla.

Izmailov (6-0, 4 KOs), from Malgobek, Russia, and Duffus (20-7, 17 KOs), now living in Los Angeles, will be fighting in support of the history-making ShoBox event in which, for the first time in the 20-plus year history of the series, all six fighters enter fight night without a loss.

A fast-rising force in the light heavyweight division, the 28-year-old Izmailov was last seen making his US ring debut at the Performance Arts Center in Dearborn, Mich., in October of this year, with an impressive two-round demolition of James Ballard (pictured above courtesy of My Art My Rules). Now residing in the United States, the fight with Duffus will be Izmailov’s second with new trainer John David Jackson.

“I am twice the fighter I was last time you saw me,” said Izmailov through an interpreter. “I have had more time to work with John David Jackson and with all that he is teaching me, I have become a new kind of animal. You will see me destroy to the head and body with non-stop intelligent pressure.”

“Ali is quickly becoming a very versatile boxer,” added Jackson. “As you know he can punch, but his boxing skills are so underrated because he hasn’t use them yet. His opponent will be somewhat crafty in the beginning, but after Ali begins to land his body punches, the fight should quickly change into his favor. He listens and learns quickly.”

A former WBC FECARBOX Light Heavyweight Champion, 29-year-old opponent Duffus went on a recent eight-fight winning streak, culminating with his title-winning victory in June 2018; a second-round stoppage of Mexico’s Victor Alfonso Leon. Never one to turn down a challenge, even internationally, three of Duffus’ last four opponents have been undefeated contenders.

“How he did against them will show you how good I am,” said Izmailov. “I’m going to tear him apart. Should I demolish him if I can or just bash on him until he quits? I will be throwing with power from new angles and in beautiful combinations. My left hook to the liver is going to really hurt.”

“Ali is a blue-chip contender, he is a skilled boxer and a big puncher,” said his promoter, Dmitriy Salita. “He is fighting the durable and very experienced Israel Duffus in only his seventh professional fight. An impressive win will show the boxing fans that Ali is on the fast track to a world title.”