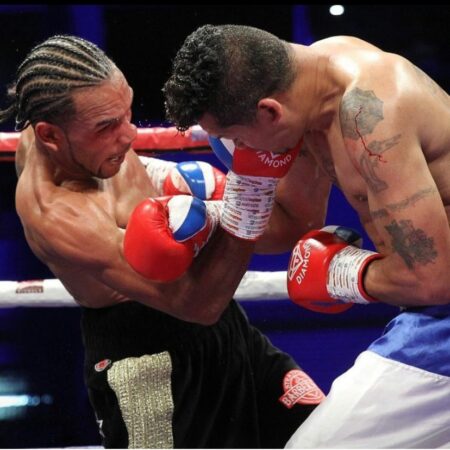 Boxer Andre Grant says the best is still to come as he prepares to return to the ring this Saturday.

The 32-year-old is set to headline Neilson Boxing’s Fight Town show at Bracknell Leisure Centre, which will showcase local talent such as Jonny Phillips, John Brennan and Alfie Best.

Grant, who will box at super-featherweight, has an unblemished record as a professional with seven straight wins with one knockout.

However, despite the flawless start to the pro-ranks, the talented Farnborough fighter insists he still has more to show.

“I’ve only fought journeymen so far, so no-one really knows what I’m about,” said Grant, who is trained by Charlie Oliver.

“When people come to fight I can display my work, but journeymen feel my power and they go into survival mode and run.

“When I come up against someone who wants a fight I’ll be able to show my skills a lot better and then people will know a bit more about me.

Early last year COVID put a stop to all professional sport, including small hall boxing which mean fighters like Grant were unable to compete.

With his last bout taking place over two years ago, the 31-year-old admits he is a little frustrated with how his career has stalled.

Because of this, Grant is keen to make up for last time by fighting a few times this year, to regain his ranking within the super-featherweight division.

“Obviously I’ve only had seven fights, the last two years has been the pandemic and I’ve also had fighters pull out on the day, so realistically I could have had 15 plus by now,” he added.

“What we are going to have to do is come back with this fight and then jump in the deep end because I can’t wait around for much longer. I need to get back up the rankings, before COVID I was ranked 21st in my weight division but I don’t know where they’ll place me after this fight.”

Promoter Mark Neilson says he is looking forward to seeing Grant top the bill in Bracknell, and believes big fights are around the corner for the 32-year-old.

“Having Andre cap the card is great, he’s a local fighter, he’s unbeaten and he’s great to watch from a fan’s perspective,” he said.

“He’s kept himself in good shape despite being out of the ring for so long, which is a huge credit to him and his trainer Charlie Oliver.

“At 7-0 he will be knocking on the door for titles soon, so this is a really big step in his career and we are delighted to be putting it on.”