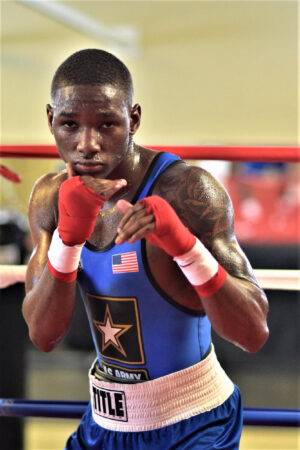 Undefeated super featherweight Daniel “G.D.F.E.” Bailey (7-0, 4 KOs) is a young, military man who will be in Boston for the first time. Rather than sightseeing, though, he’s all business as he prepares for his September 25th fight on “Fight Night On The Charles III” at Mosley’s On The Charles in the Boston suburb of Dedham, Massachusetts.

Bailey (7-0, 4 KOs), who fights out of Miami by way of Tampa (FL), will make his New England debut against an opponent to be finalized in a 4-round bout. A 4-time U.S. Army and 2012 Ringside National champion, Bailey is the cousin of multiple world champion Randall Bailey.

Most would think this Army veteran would try to visit Bunker Hill, Lexington and Concord where the Revolutionary War started, or any of the other many historic attractions for tourists in Boston. Forget that he’s not even attending Friday night’s show, never mind visit the nearby city.

“After the weigh in (Friday afternoon),” the 25-year-old Bailey said, “I’ll be resting in my room until Saturday. I don’t take anyone lightly. But I am excited to be fighting there for the first time and I’m ready to perform for the crowd. This trip is all business, I’m not on vacation.”

This will mark the active fighter’s sixth fight in 2021, possibly the most for any American fighter during the pandemic. In his last fight this past July in Miami, Bailey won a 4-round unanimous decision against Mike Fowler.

“I’m a man on a mission,” Bailey explained. “I want to end the year with a 10-0, 7 knockouts record. I’ve put pressure on myself because, I want to look great while winning. I’m a lot surer of myself as a professional than I was as an amateur. I’m still the same kid I was the first time I walked into the gym at an 11-year-old. I always put in overtime world that I’m not asked to do.”