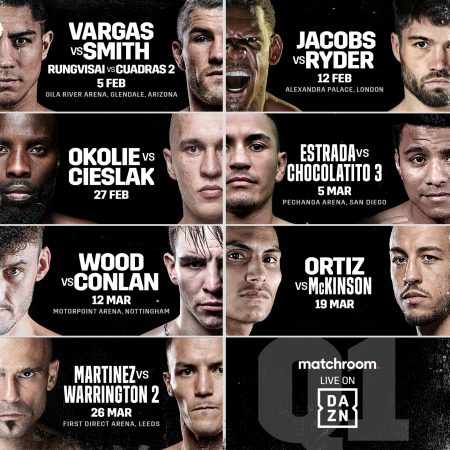 Eddie Hearn and Matchroom are delighted to announce a stacked start to 2022 in the USA and UK with seven blockbuster events to kick off a huge year on DAZN.

•    Saturday, February 12: Daniel Jacobs vs. John Ryder
Super-Middleweight John Ryder looks to step up in 2022, taking on two-time Middleweight World Champion Daniel Jacobs at the famous Alexandra Palace in London. The event will be live worldwide on DAZN (excluding New Zealand and Australia).

•    Saturday, March 05: Estrada vs. Chocolatito III
Juan Francisco Estrada and Román ‘Chocolatito’ González run it back once more for a highly anticipated trilogy fight for the WBA, WBC Franchise and The Ring Magazine Super-Flyweight titles at the Pechanga Arena San Diego in San Diego, California. The event will be live worldwide on DAZN.

•    Saturday, March 26: Kiko Martinez vs. Josh Warrington II
Spanish two-weight World Champion Kiko Martinez puts his newly acquired IBF Featherweight belt on the line against old foe Josh Warrington at the First Direct Arena in Leeds. Warrington outpointed Martinez in a close contest at the same venue back in May 2017. The rematch will be live worldwide on DAZN (excluding New Zealand and Australia).

Eddie Hearn, Matchroom Boxing Chairman, said: “We ended 2021 with a bang and I can’t wait to get started in 2022. It’s going to be such an exciting year for Matchroom and DAZN with massive events all over the world, and I’m delighted with the early schedule we’ve put together – unifications, World title action and career-defining nights; there’s so much drama packed into these nights, and we’ve got plenty more to add soon.”

Ed Breeze, EVP Rights at DAZN, said: “After a stacked fall fight schedule on DAZN to close out 2021, we’re committed as ever to maintain that pace with our partners and thrilled to announce an unrivalled start to 2022 – a year that will see new matchups constantly added as we continue to deliver nonstop boxing action to subscribers and fight fans all around the world.”