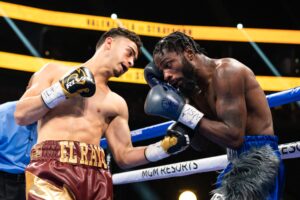 The 22-year-old Valenzuela scored a knockdown early in the first when an overhand left sent Strayhorn staggering back. Referee Raul Caiz Jr. ruled that the ropes held Strayhorn up and administered a standing eight count.

In the second, Valenzuela showed poise as he pressed the attack behind his lefty stance. Strayhorn had his moments in the third round. However, the heavier blows came from Valenzuela, who poured it on until the bout’s end at 1:29 of the fourth round.