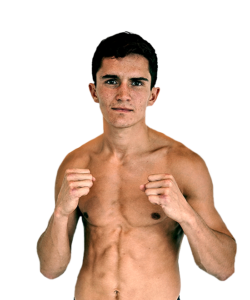 ‘Loco’ Lynn got on the title trail himself in March when he won the WBC International Silver belt by peppering the tough Spaniard Sebastian Perez for 10 rounds to win a clear points verdict. Having acquired a taste for title action, the 25-year-old has quickly turned his attention to domestic matters and Nottingham man Wood is the man currently ruling on the home front.

Wood, who won the vacant title in a shootout against Reece Mould in February after being defeated by Jazza Dickens a year previously, got wind of his name being mentioned and fired back a message marked for the attention of the 9-0 Lynn from Banstead.

“I did an interview a few weeks ago with a boxing podcast that was only put up last week, where I said I would happily take the British title fight,” revealed the Peacock Gym-trained Lynn. “Wood came back on Instagram saying I was not ready for the level yet, but he is sure we could get the fight made.

“I am more than happy to jump straight in with him, it is not a problem for me. The thinking was, after talking to Francis (manager, Warren), was to defend my belt, but when I saw that from Wood I rang him and asked if we could get the fight. He said he would talk to Wood’s promoters.”

Lynn accepts that jumping in with Wood with less than 10 fights on his clock would represent a considerable risk to his immediate career progression and that a number of touted prospects have been overwhelmed by more seasoned campaigners in recent times.

However, this in no way puts him off the job, with Lynn pointing out that the ambitious and resilient Perez provided him with ideal preparation for such a challenge.

“Of course, that is why I am grateful for that last fight. I’ve shown I can do 10 hard rounds with Perez and I know Leigh Wood is a top fighter and didn’t win the British title for nothing. Even if he is like Perez and can keep coming and coming, then it is up to me to hit and not get hit and make sure I am on point.

“We’ll see, if it comes next it would be nice, if not maybe I will have one more fight before going in for it. I don’t mind.”

Charlo vs. Macias at the Toyota Center in Houston June 19 Jamie McDonnell Announces His Retirement From Boxing