A ‘tear up’ and nan’s cooking… what makes Hannah Rankin tick? 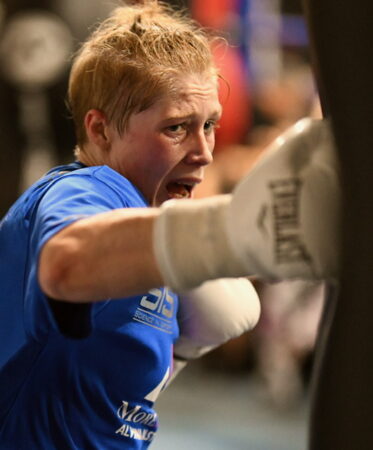 Hannah Rankin?  There’s much more to the Scot than just being one of the UK, and world’s, top female fighters.

On the night, Rankin and Sweden’s Lindberg will clash for the IBO and WBA World Super Welterweight belts live on Fightzone in what will be one of the biggest fights in the UK women’s boxing calendar this year.

With the countdown well and truly on, found out much more below about just what is it that makes Hannah tick…

Any amateur achievements? How many bouts did you have? Win/lose?
I didn’t come through the amateur system. I started first competing in white collar and never lost a fight.  Then I went into the professional ranks.

Favourite all-time fighter?
My favourite all time ever fighter is Arturo Gatti! Win, lose or draw he was always in an exciting fight and I love his style.

What are your strengths and weaknesses as a boxer?
I’ve been told my strengths as a boxer are my heart, determination and drive and my ability to learn quickly! My weaknesses is that I like to fight and enjoy getting involved for a good tear up!

What weight do you see yourself winning belts at?
Obviously I see myself winning titles at 154lbs but I also feel I could win titles at 147lbs as well.

Name one fighter you would like to face in 2021/22?
I would love a chance to fight against Marie Eve Dicaire who is another 154lbs World Champion from Canada.

Which actor would you choose to play you in a movie about your life?
I think Natalie Portman is very cool so I’d have to pick her to play me in a film.

Your boxing ambitions? What do you want to achieve in the sport?
Boxing wise my main focus is becoming a 2x world champion on the 5th of Nov and after that I would like to unify a division or become a two weight world champion. After I retire I would like to work in commentary for boxing.

Who is your biggest inspiration?
My biggest inspiration is my mum. Sadly she passed away but she was a super hero in my eyes. She gave me encouragement in whatever I chose to do, pushed me to be the best I could be and instilled a great work ethic in me.

Tell us an unusual fact about yourself?
My primary school was so small that I was the only one in my year for 4 years.

What is the first thing you’d buy if you won the lottery?
I’d buy space to set up a boxing gym.

Where do you see yourself in five years’ time?
In five years time I hope to see myself a multiple world champion and working in commentary.