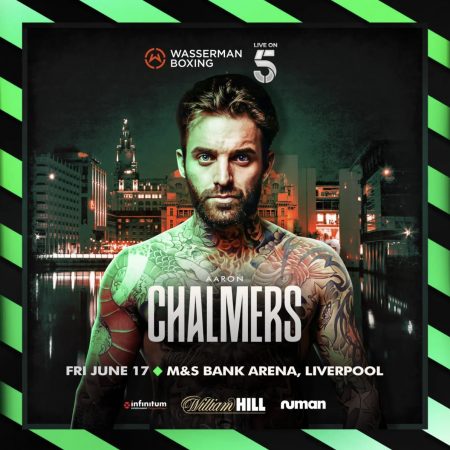 After a successful career in MMA with organisations such as Bellator and BAMMA, racking up a highly commendable 5-2 record, new horizons beckon for the former Geordie Shore star Aaron Chalmers.

Having decided to switch codes from MMA to boxing and team up with Wasserman Boxing, the Newcastle fighter now has a fantastic platform to showcase his skills, as he makes his professional debut on Friday June 17, as part of a huge night of free-to-air action at the M&S bank Arena in Liverpool, live on Channel 5.

Chalmers starred on television screens in 2014 as he joined Geordie Shore cast, but has since committed himself to combat sports.

The 34-year-old made his MMA debut in 2017 and soon caught headlines in with his striking talent, taking less than a minute to produce a stunning left-hand KO in only his second professional fight.

Since deciding to transition from the cage to the square circle, Chalmers has been working hard behind-the-scenes training alongside fellow Wasserman Boxing fighters Josh Kelly and Harlem Eubank under the guidance of coach and manager Adam Booth.

‘I feel like my debut has been a long time coming now and what better place to have it than in Liverpool, it’s always a cracking atmosphere there. I can’t wait to put on a show and get my boxing career rolling,” said Chalmers.

The proof of Chalmer’s appeal is apparent from his following on social media, where he boasts over 2 million followers who will be itching to see him make a successful debut at the M&S Bank Arena. All involved with Wasserman Boxing are equally as excited to see him start his professional boxing career.

Kalle Sauerland, Head Of Global Boxing a Wasserman said: “We’re very excited to have the big-hitting Geordie Shore star on board. He’s been fine-tuning his skills in boxing around some of the best in the game.

“If he wants to go down this path then there’s no better environment to do that, and certainly no better platform than in Liverpool on June 17 to prove his potential and show what he has learnt under one of the best in the business, Adam Booth.”