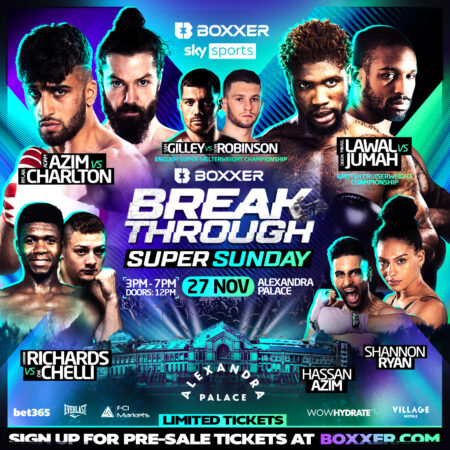 Get ready for a ‘Super Sunday’ like no other with some of the country’s brightest boxing talent set to light up one of the nation’s most iconic venues when Adam Azim headlines BOXXER: Breakthrough takes place at the Alexandra Palace, London on Sunday, November 27th.

In what is an action-packed weekend of sport, BOXXER brings a festival feeling to the nation’s capital and a new boxing experience.

And fight fans can look forward to an unmissable feast of activities at ‘Ally Pally’ in an afternoon jam-packed with 50:50 fights and some of the country’s future superstars – live and exclusively in the UK and Republic of Ireland on Sky Sports.

Adam ‘The Assassin’ Azim, a generational talent and the most exciting prospect in British boxing today, faces a tough test which will draw even more attention to his ever-growing profile as he faces the wily fan-favourite Rylan Charlton in the main event.

Amir Khan – who became world champion at 22 – has predicted the 20-year-old Azim to beat his record and win a world title even sooner. Judging by the blistering pace he has set this year – with four highlight-reel stoppage wins from four fights – the Shane McGuigan protege is on track to prove Khan correct.

In what will be his first headline fight, Azim must get through talented rival Charlton, who most recently won two fights in one night to come runner-up in April’s eight-man BOXXER Series: Lightweight tournament

And Adam’s undefeated older brother Hassan Azim will be on display too as he looks to extend his flawless unbeaten record and continue his climb in the welterweight rankings.

Fans will also be thrilled by news that top-tier super-middleweights Lerrone Richards and Zak Chelli are squaring off in what is sure to be an electrifying encounter. Richards is tipped as one of the best super-middleweights in the world and reigning English champion Zak Chelli is stepping up to face the former British, Commonwealth and IBO world champion in an exciting clash of styles.

The vacant British Cruiserweight Championship will be on the line between London rivals Mikael Lawal and Deion Jumah in what will undoubtedly be a heavy firefight for the domestic circuit’s top honour.

The English Super-Welterweight Championship will be on the line when reigning champion Sam Gilley meets Sean Robinson to make his second defence of the belt he won with a brutal body-shot finish in November 2021. He scored another stoppage win back in April and now looks for his third consecutive finish.

And the popular super-flyweight sensation Shannon ‘Chaos’ Ryan makes a quick return to the ring following her thrilling win on the undercard of last weekend’s landmark BOXXER: LEGACY event. Ryan’s fourth bout of 2022 is also her fourth professional bout, as the budding starlet looks to end her first year as a pro with a quartet of wins to her name.

BOXXER CEO and Founder, Ben Shalom, said: “This will be our first-ever ‘Super Sunday’ live on Sky Sports – and we can’t wait to do something that hasn’t been done before.

“This event will showcase some of the very best talent this country has to offer in a new environment. Adam Azim has been sensational so far and faces his toughest test to date in what is his first headline fight. Everyone expects him to become a world champion and I expect him to use this fight as a launchpad for further success in 2023.

“We have a cracking card in store. Lerrone Richards vs Zak Chelli promises to be a real treat too, along with a brilliant British title fight between Mikael Lawal and Deion Jumah.

“Ally Pally is one of Britain’s best-loved venues and has a reputation for drawing a great atmosphere. There will be a festival feeling to compliment the incredible card in a new broadcast environment. We’re really looking forward to ‘Super Sunday’ at this iconic venue on November 27th.”

Adam Smith, Head of Boxing Development at Sky Sports, said, “What a super Sunday afternoon of action we’ve got lined up for November 27th, with the always electrifying Adam Azim topping a card stacked with tomorrow’s stars and some of the hottest properties in British boxing today.

“There’s something fitting in the synergy between bringing the new generation of talent to one of Britain’s most iconic venues. History has been made repeatedly at the Ally Pally and many of the boxers on the November 27 card are on track to make history themselves over the course of their careers.

“A midday start and a 7pm finish is about as perfect a sporting Sunday as you could wish for and I just know this is going to be one of the most fun events of the year.”

Tickets for this event will go on pre-sale next week Wednesday, October 26th at 10am, with any remaining tickets then going on general sale to the public from 10am on Friday, October 28th.

Young fans can attend the live event, with entry open to ages 8 and upwards, provided that any under-18s are accompanied by someone over the age of 21.

Registration for pre-sale tickets is open now at Boxxer.com