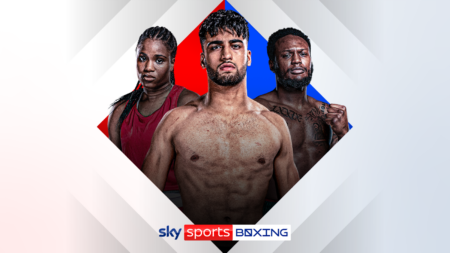 The Assassin’ has his next assignment: the electrifying Adam Azim (7-0, 6 KO’s) will return to the ring on Saturday, February 11 at the OVO Wembley Arena in London, England against undefeated South American Santos Reyes (12-0, 3 KO’s).

With six consecutive stoppage victories – including November’s stunning two-round demolition of the highly-regarded Rylan Charlton – Azim has now established himself as the world’s leading lightweight prospect and considered by many as a future world champion after his breakthrough 2022.

The young prodigy was bestowed with accolades for his astonishing run last year, including the BBC Sport ‘Young Fighter of the Year’ award and the Boxing News ‘2022 Prospect of the Year’. Azim’s trainer Shane McGuigan was also declared ‘Trainer of the Year’ by leading UK media sport’s outlet GiveMeSport.

Azim takes the next step on his journey to world title contention next month – live and exclusively in the UK & Ireland on Sky Sports – and marks a significant career milestone as he headlines a major British arena for the first time.

If the amazing Azim can add a seventh consecutive stoppage to his own record in the process, it will underline his staggering potential – all-time great Amir Khan won his first major world title at the age of 22, but has predicted Azim will win a world title even sooner.

Reyes hails from Nicaragua, a Latin American boxing powerhouse which has produced names such as Alexis Arguello and Ricardo Mayorga, and went 4-0 in 2022. He is the current WBA Fedecentro (‘Central America’) champion and successfully defended his title with a dominant decision victory in December.

Best known to British fight fans for her WBA Intercontinental title battle with Natasha Jonas’ arch-rival Terri Harper in March last year, Abellaneda – who has successfully defended her Argentian national title four times since winning it in December 2020 – is making her second visit to the UK next month.

Dubois’ standout amateur career – in which she became Youth Olympic champion, World Youth champion and four-times European Youth champion – has segued seamlessly into the professional ranks. Like her stablemate Adam Azim, she went 5-0 in 2022 and marked herself out as one of the global boxing scene’s talents to watch.

The English Middleweight Championship will be on the line when newly-crowned champion Tyler Denny (15-2-3) makes his first defence of the title he won in November with a win over hotly-tipped Manchester talent Brad ‘The Sting’ Rea.

Challenging Denny is undefeated Cornwall man Brad Pauls (16-0, 9 KO’s). ‘The Newquay Bomb’ brings a 56% stoppage ratio to the ring and goes into the bout off the back of a win at London’s 02 Arena last summer.

Three stoppage wins in three fights – two of them coming inside the first three rounds – made 2022 a year in which young prospect Viddal Riley (7-0, 4 KOs) marked himself out as a rising threat in the stacked cruiserweight division.

On February 11 he turns his attention to Anees Taj (7-2-0, 5 KOs), a BOXXER Series tournament veteran, and aims to make it judgement day for the law graduate and Watford Grammar School alumnus and start his 2023 campaign in style.

Taj, who narrowly missed out on a place in the 2020 Olympics boxing squad for Pakistan and was once on track to be a professional rugby player before switching to boxing, rides a two-fight win streak into the clash.

Both boxers have no-nonsense fighting styles and look to end their bouts as quickly as possible. Their encounter is likely to be a highly entertaining heavy-artillery firefight – for as long as it lasts.

Tickets are on sale now. Further bouts for the all-action February 11th card taking place at OVO Wembley Arena will be announced in due course.

Leigh Wood faces Mauricio Lara in Nottingham on Feb. 18 Roiman Villa says Rashidi Ellis can have another beating if he wants it