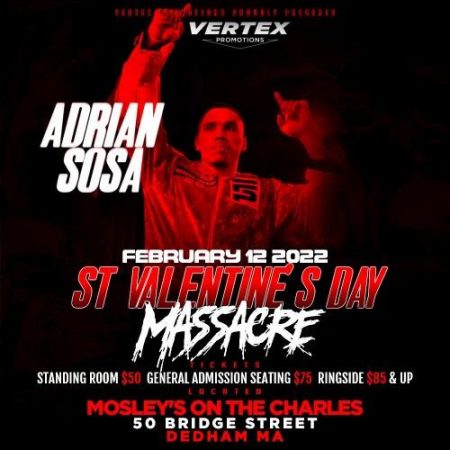 Moseley’s On The Charles in Dedham, Massachusetts, USA – 12 February 2022

“We’re very excited to continue promoting our shows to showcase local talent,” Vertex promoter Dave Clark said. “We made our debut last September and promoted three more pro shows last year. We learned a lot and continue our goal to keep local fighters active and provide an entertaining night out for fans.”

The 26-year-old Sosa (12-0, fighting out of Lawrence (MA), headlined a Vertex show last September in his first action in more than 2 years. He will take on an opponent to be determined Feb. 12th in the 8-round main event.

In the 8-round co-featured event, undefeated ABF American West and NBA Continental champion RayJay “The Destroyer” Bermudez (15-0, 11 KOs) faces TBA as the Albany fighter continues his march towards a major fight.

Boston Irish will be in the house as Ireland-natives “Lethal” Larry Fryers (11-5, 4 KOs) and Tommy “The Kid” O’Toole (2-0, 2 KOs) are schedule to be in action. Fryers, a welterweight now living in Yonkers (NY), is a 20212 Ulster Intermediate Champion, while light heavyweight O’Toole (2-0, 2 KOs) returns to the Boston area for his third pro fight. O’Toole, fighting out of Galway, was a 2019 Irish Elite Championship gold medalist.

Fryers will be in a scheduled 8-rounder, O’Toole a 4, and both will be matched against opponents to be determined.

Opponents will soon be announced. Fighters subject to change.

Tickets are on sale for $85.00 and up (ringside), $75.00 (general admission) and $50.00 (standing room). Tickets are available to purchase online at https://www.eventbrite.com/e/st-valentines-day-massacre-21222-tickets-243038654157?aff=ebdssbdestsearch or contact any of the competing fighters to purchase tickets.