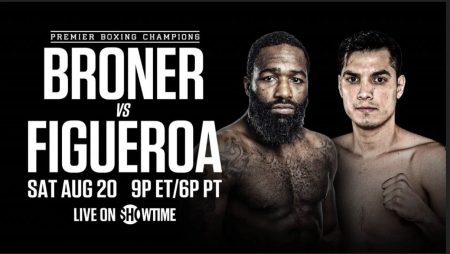 Four-division world champion Adrien “The Problem” Broner, one of the sport’s most notable attractions and biggest personalities, will make his long-awaited return against all-action former world champion Omar “Panterita” Figueroa in a 12-round super lightweight showdown headlining action live on SHOWTIME on Saturday, August 20 from Hard Rock Live at Seminole Hard Rock Hotel & Casino in Hollywood, Fla. in a Premier Boxing Champions event.

Tickets for the live event are on sale now and can be purchased at Ticketmaster.com.

The two former champions present an intriguing contrast of styles as the flashy, technical skills of Broner match up against the bruising, volume attack of Figueroa. Both fighters have reached incredible highs and delivered memorable moments throughout their careers and will look to go through one another to return to championship contention.

Cincinnati’s Broner (34-4-1, 24 KOs), is one of the most popular and colorful personalities in the sport and quickly rose to prominence by combining supreme boxing with a brash outspoken personality. By the age of 26, he had captured world titles at 130, 135, 140 and 147 pounds, becoming one of only eight active fighters to win a world championship in four divisions. Broner has faced several multi-division world champions such as Manny Pacquiao, Paulie Malignaggi, Marcos Maidana, Mikey Garcia and Jessie Vargas. He most recently won a unanimous decision over Jovanie Santiago in February 2021 and now returns to the super lightweight division where he dominated Khabib Allakhverdiev to win a 140-pound title in 2015.

“I’m going in there to try to stop Figueroa,” said Broner. “I’m going to take the fight to him and go ahead and get him out of there. What I expect from him is the same gruesome Figueroa that we always see. He’ll try to make it a rough fight. Every fighter is different, but I don’t think he’ll be hard to hit. So, I’ll see ya’ll on August 20.’’

The 32-year-old Figueroa (28-2-1, 19 KOs) is from a fighting family along with his younger brother Brandon, a former super bantamweight world champion. Figueroa won the WBC Lightweight World Championship with a unanimous decision victory over Nihito Arakawa in a 2013 “Fight of the Year” and successfully defended the title two times before moving up to super lightweight in 2015. Figueroa has also fought at welterweight, earning action-packed victories over Robert Guerrero, John Molina Jr., and Antonio DeMarco. He’ll move back down to super lightweight on August 20 after back-to-back defeats against Yordenis Ugas and Abel Ramos.

“I’m excited to move on to the next phase of my life and career, especially now that my mental health is at the forefront of everything I do,” said Figueroa. “Having a clear mind has been the best thing to happen to me. Now I’m able to focus 100% on my boxing career and I can’t wait to be back in the ring on August 20.”

A native of San Juan de la Maguana, Dominican Republic, Puello (20-0, 10 KOs) now fights out of Las Vegas under the guidance of renowned coach Ismael Salas. The 27-year-old leapt up the rankings in July 2019, handing Jonathan Alonso his first career defeat with a unanimous decision victory that earned him an interim title. Puello was successful in his U.S. debut in December 2021, as he scored a unanimous decision victory over Veshawn Owens in Owen’s hometown.

“I’m very committed to winning this fight for my team and my country,” said Puello. “I am more than prepared to make the most of this opportunity. My only focus is on earning this victory, becoming world champion and taking on all the challenges that come my way after that.”

Born in Uzbekistan and now fighting out of Los Angeles, Akhmedov (9-1, 8 KOs) represented Turkey at the 2016 Olympic games. The 31-year-old turned pro in 2017 and won his first seven pro fights, with six coming by knockout. His lone blemish came in an action-packed title fight against Mario Barrios in September 2019, where he was able to survive two knockdowns to make it a close fight, before eventually losing by decision. Akhmedov has rebounded to win back-to-back fights, including a stoppage of the typically durable former world champion Argenis Mendez in June 2021.

“I’m excited that I’m finally getting my shot at the world title again,” said Akhmedov. “I have worked very hard to reach my goal of becoming world champion. This time, I’m going to do everything possible to make sure that I take full advantage of this opportunity.”

The 27-year-old Gutierrez (26-3-1, 20 KOs) captured his world title with a unanimous decision victory over Rene “Gemelo” Alvarado in January 2021, in a fight that saw him drop his opponent three times. Gutierrez followed up that performance by defending his world championship and defeating Alvarado a second time in August 2021, again earning a unanimous decision. Fighting out of his native Maracaibo, Venezuela, Gutierrez is unbeaten in his last seven outings, including four knockouts.

“I am excited to return to the ring and defend my title for the second time,” said Gutierrez. “This is going to be a difficult fight, but I am confident in my abilities and my preparation, and I know I will be victorious. I am ready to show the world again that I am the best in this division.”

Tall and rangy with good power in his left hand and a dedicated body attack, the 30-year-old Garcia (15-0, 10 KOs) scored one of the biggest upsets of the year in February, when he stepped in as a late replacement for Gutierrez to defeat then-unbeaten Chris Colbert on SHOWTIME in Las Vegas. The 5-9 Garcia represented his native San Juan de la Maguana, Dominican Republic, in the 2016 Olympics before turning pro in December that year. Along with his countryman Puello, Garcia is also trained by the highly respected Ismael Salas in Las Vegas.

“This is a very important fight for me because I have worked for so long to win a world title,” said Garcia. “This fight is for all of the people in the Dominican Republic. I can’t wait to display my skills for them once again on SHOWTIME. It’s also a very special night because me and my friend Alberto Puello will both be fighting for world titles, the first time two Dominicans will do so on the same night. We grew up together and had the same amateur coaches and now we have a chance to make history together.”