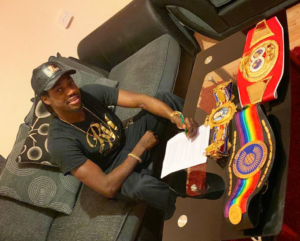 British and Commonwealth super-lightweight champion Akeem Ennis Brown has big ambitions for the future after he extended his contract with MTK Global.

The man known as ‘Riiddy Riiddy Riival’ enjoyed a successful 2020, defeating Philip Bowes in September to win the Commonwealth and vacant British titles at 140lbs.

Undefeated Brown (14-0, 1 KO) is now ready to kick on from there, as he looks to add more gold around his waist over the next 12 months.

He said: “I’m very pleased to be extending my contract with MTK Global. They’re the best management company in the world and we pair off together well. If they say they’ll do something they’ll get it done, and that’s the same mindset as me.

“I was proud to become British and Commonwealth champion in 2020, and those are two belts I’ve wanted for a long time. A lot of fighters miss out on those titles and go down other routes, but for me I always wanted to do it the traditional way.

“I won the English and then won the British and Commonwealth, so if I can go on to win the European title and then the world title I’ll be very happy. I’ve done it the old school way and I’m representing my city of Gloucester and putting it on the map.

“In 2021 I just want even bigger fights and more of these opportunities. The thought of the big fights makes me stay up late in the gym and do the extra hours, so I’m very excited.”