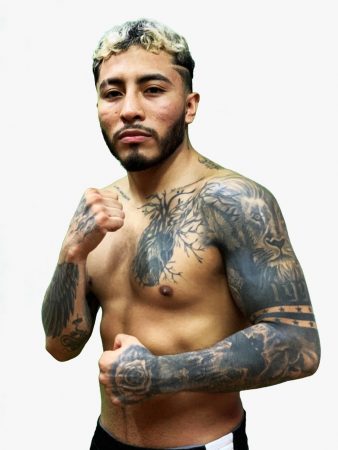 With the Showtime cameras rolling at Park MGM’s Dolby Live in Las Vegas, Santiago (24-3-5, 13 KOs) and Russell fought a grueling all-out war for ten rounds with many feeling Santiago’s pressuring style had outshined the undefeated Russell’s speed after 10 intense rounds.

However, once again it was not to be for the hard-luck Santiago, as Russell was given the nod via a questionable majority-decision. Judges Steve Morrow and Benoit Roussel scored Russell a 96-94 winner, while Judge Lisa Giampa scored the contest a draw at 95-95.

The “victim” of several controversial draws against top fighters in high-profile fights, including one particularly dubious draw against IBF Super Flyweight Champion Jerwin Ancajas in 2018, 25-year-old Santiago, from Tijuana, Baja California, says he’s not shocked or disheartened by the loss to Russell.

“I wasn’t shocked because I have been here before,” explained Santiago, post-fight. “My team had warned me that the closer rounds will go to Russell because he is the house fighter. When my promoter Paco Damian calls me for an opportunity like this, I never say no. I embrace the opportunity and I don’t care if I have to go and fight my opponents in their backyard. I mean, look at my record I have five draws, I believe I won all those fights including the Jerwin Ancajas world title fight.”

In fact, the realistic Santiago surprisingly blames himself for the setback.

“I don’t like to use the term robbed,” said Santiago. “In my opinion, I thought I won 6 of the 10 rounds. It was a very close fight and there is no one here to blame but me. I blame myself because it took me the first couple of rounds to make adjustments and follow our game plan.”

Despite the disappointment, Santiago says his strong performance against Russell, a celebrated 2016 U.S. Olympian, negates any career damage he may suffer.

“I would love the opportunity to fight Russell again, I think it was a great fight and I’m sure many people will love to watch us do it again. And this time, I would like it to be for a title eliminator that will give the winner the opportunity to fight for a world title. But if Russell doesn’t want another war that I will bring, we move on. My career has been defined by people underestimating me and paying the price for their mistake. I’ll be back.”