Alen “The Savage” Babic Back in September? “A Complete Lunatic” Says Eddie Hearn 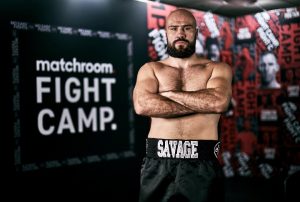 After his absolute mauling of American Shawndell Winters from Saturday (Whyte vs Povetkin card), Alen “The Savage” Babic kept to his promise and nickname as he demolished the american in two rounds. Babic 4-0, 4 KO’s (14st 9lbs) sent Winters 13-4, 12 KO’s (13st 12lbs) back to the US with his tail between his legs after just a total of 5 minutes and 20 seconds of ring action.

We learnt more about Babic in this fight than the previous 3 fights combined as they were all against journeymen that had a losing record. This fight showed that he is indeed savage and we have some fun times ahead with him. Only snag….he is light for a heavyweight and that will probably be his downfall when at some point he will have to face one of the divisions behemoths. If only he could fight at cruiserweight.

He is looking to fight and climb the rankings as soon as possible after what is the best performance of his short career (Winters was just his 4th fight).

Eddie Hearn is apparently putting a fight card together next month with WBA International light-heavyweight champion Joshua Buatsi set to headline. Babic will probably be on the undercard.

Eddie Hearn said: “We still don’t know how good ‘The Savage’ is. We know he’s a right f–king handful and a complete lunatic, but what happens after four or five rounds?”

Whilst it is just a rumour, at some point a match up with Dave Allen is said to happen. Until he meets the big boys, there will be for sure some savage times ahead.