Alen “The Savage” Babic Speaks Ahead of Tonight’s Fight 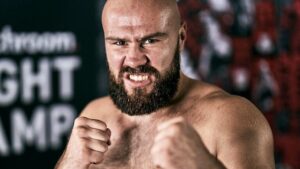 “Joe Frazier was always my idol and always will be, because of his humbleness and his ruthlessness in the ring,” Babic said. “That’s what I try to mimic.

“I like Niall, don’t get me wrong, but he never knocked out anybody. Shawndell was a top knock-out artist, he is nowhere near.

“I would just like it to be a better opponent, someone from the top 20 or 30, then we can redo the Thrilla in Manila. If Niall can just set up those trenches, I can ravage them. I would really like it to be an honest, noble fist fight. I don’t want him to go back and wait to be knocked out, I want him to fight.

“People know me, people accept me for who I am, I speak like I am, so I have nothing to hide.

“I can’t switch it off. The Savage does what the F he wants. I just hope it is with me in my important fights. It’s not a guarantee. He is a f–king lunatic, he’s crazy.

“And he started to call me Savage all the time and after four or five days, it caught on. He recognised that in me.

“I don’t care who I fight, I call out Hrgovic every day. I call him out every day of my life, I can’t go much quicker than that.

“I ask fans who do they want me to fight. They always say the same names – Dave Allen, Tom Little, Lucas Browne, Nick Webb, some Kash Ali guy. I like Tom Little, he is almost as crazy as me, I think we are going to box on November 21.

“It didn’t affect us at all because Dillian such a tough man. After the fight, Dillian looked crisp and sharp and Povetkin was the one who looked shook up. And Dillian is good, he’s come back to training even stronger. I don’t think Povetkin has anything else to give and Dillian has a lot to give.”