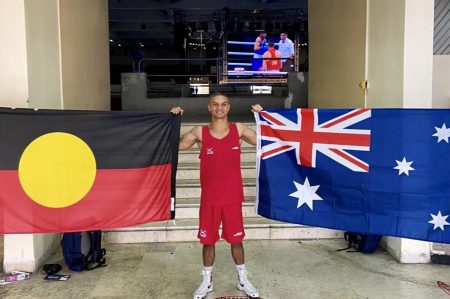 Olympian Alex Winwood is launching his pro career in style, as he goes directly into state title action on his pro debut, headlining the 40th edition of Dragon Fire Boxing’s iconic Thunderdome Series.

Winwood was bizarrely stopped in his quest for Commonwealth glory at the Commonwealth Games in Birmingham, England, with the reaction to his stoppage going viral.

“The Olympics & Commonwealth games was a great experience despite how it ended for me. I’ve got a lot of attention from that, but I wanted the attention to be for winning a medal, not for being stopped in a strange fashion.

“I want to head into the pro ranks with all that behind me and right the wrongs. I was one of the best amateurs on the planet and I want to recreate that in the paid code.”

Winwood goes straight into title action, with his management at Dragon Fire Boxing headed up by Tony Tolj wanting to progress the well traveled amateur standout in quick fashion.

The Western Australian native discussed his road to the pro ranks from a preparation standpoint.

Winwood stated, “I’m delighted to be with Tony Tolj and Dragon Fire Boxing, they’ve got a plan and they know what I want, and I think starting with a fight for a state title is the right move. I’m excited and I’m really motivated to put on a show.

“I’ve worked with both Moloney brothers over the last year and they’ve prepared me for what’s ahead in the professional ranks. I’ve learned a lot from the Moloney’s and that type of education is what I need to become a world champion.

“I’m happy I’m starting my journey in Metro City, Perth in WA. There’s nothing like fighting at home, and I can’t wait to put on a show.”