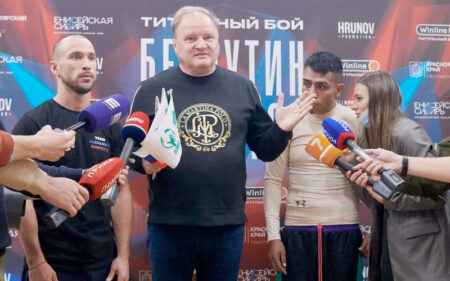 Russian Alexander Besputin will clash with Mexican Mauricio Pintor, in a welterweight bout on September 11th at the Ivan Yarygin Sports Palace in Krasnoyarsk, Russia.

This important fight between two nations with a great boxing history will celebrate the World Boxing Council’s commitment to BoxVal, an integral part of Scholas Occurentes, Pope Francis’ non-religious foundation, which fosters and promotes world peace, especially among young people.

Scholas has designated Besputin vs. Pintor as “Fight for Peace” as a tribute to inclusion and a continuous effort to build bridges and promote peace in the world. BoxVal (Boxing with Values) is Scholas’s boxing program that reaches all corners of the world through our sport, and is administered by the WBC.

Besputin, 30, of Kamensk-Uralsky, has an impeccable record of 14 wins with 10 knockouts. In his most recent bout, he defeated Viktor Plotnikov by TKO in two rounds.

Pintor 27, from Mexico City, paints a similar portrait. He has a record of 24 wins with 14 knockouts, 3 losses and a draw. In his most recent bout, he defeated Kendo Castañeda by wide decision.
A public training session was held, during which both warriors showed that they are in excellent shape for this important commitment.