Algieri Trainer: Conor Benn’s arrogance could be his undoing 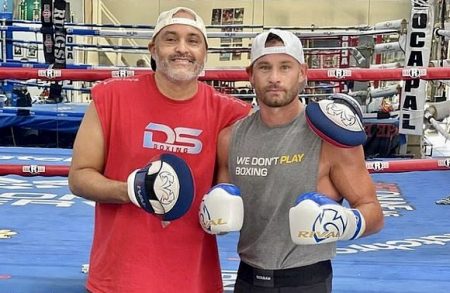 Derik Santos: Conor Benn not the killer Nigel Benn was…I don’t think he’ll be able to live up to his father’s resume

“His father Nigel Benn was a great fighter; very tough, gritty, one of those killers in the ring. His father was an awesome fighter. With all due respect to Connor but he’s definitely not his father. In Conor’s fights up to now there’ve been a lot of question marks over his performance at times. I think there’s been a lot of making him out to be maybe this phenom, or this killer, or this killer puncher that his father was, but he’s not. I don’t even think he believes that. I think he’s trying to convince himself of that.”

“As far as Conor living up to the achievements of his father, the short answer is: I don’t think so. I believe that if you could put a prime Nigel Benn in today’s boxing world he would still be a top contender, if not a champion. I don’t see Conor as that. I do believe that he tries to convince himself that he’s already at the top level and that’s obviously not the case.”

“The weight division that Conor is in, you have got to ask yourself, does he beat Errol Spence, Crawford, or Shawn Porter? I don’t think he’d beat Ugas. If he fought Manny Pacquiao tomorrow, he will get beat. If you look at a lot of the top contenders at 147 – I don’t think he beats any of them. They would all be extremely difficult for him, so no, I don’t think he’ll be able to live up to his father’s resume side by side.”

Derik Santos: Conor Benn’s arrogance could be his undoing…Eddie Hearn is worried about this fight

“As far as Conor’s undoing, what is any fighters undoing? Sometimes it’s their own arrogance, sometimes it’s their own thought that they’re Invincible. Conor has to look at himself in the mirror and ask himself can he really keep it together in the face of adversity? Does he really think that he’s the greatest thing in the division? I’ve heard a lot of people, even from the UK, who are not exactly fond of his mannerisms. He can be his own undoing.”

“He’s a fighter, he’s training hard, his team is training hard, I respect them, they came looking for us because obviously they’re trying to find out at this point where Conor Benn is. If you had to ask Eddie Hearn was he confident in Conor, or is he worried about this fight – he would tell you he’s worried, but of course, he’s got to cheer for his man.”

“The biggest question about this fight is: does Conor Benn belong at this level? Chris Algieri has already proven his worth, he’s been a world champion. He’s fought many people who were at the time in their career better and tougher than Conor Benn. This is by far Benn’s toughest fight.”

“When water gets in the boat, you’ll find out how people react. Will he sail along steady in the fight? Will he panic and start pushing too hard and ultimately be his own demise? Will he jump out of the boat and drown – we’ll find out.”

“After his last fight there are questions about his growth, can he go out there and look spectacular against the highest level fighters and that’s the biggest question. He’s going to try and find out when he faces us, and we’re definitely going to give him a test.

“We hope that we can execute and it all clicks on fight night. If it clicks the way he’s been clicking in sparring, we will win that night.”

Paul Butler: I am not scared of anybody, Casimero is the same as me! Dmytro Zubko & Roman Golovashchenko win UBO International Titles