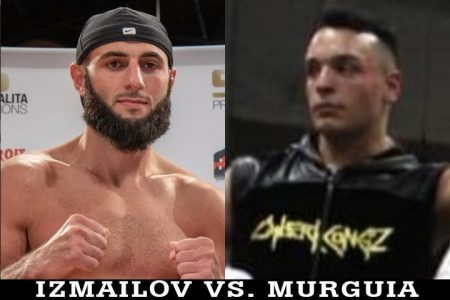 Unbeaten WBO #12-, IBF #11-, WBC #7-ranked light heavyweight Ali Izmailov (8-0, 6 KOs) and also undefeated Eric Murguia (14-0, 12 KOs) will be fighting for the USBA Light Heavyweight Championship when the pair meet in one of two stereo 10-round main events at Salita Promotions’ next Detroit Brawl, on Wednesday, August 10, 2022, at the historic Garden Theater in Midtown Detroit.

“I am excited for my title fight against Eric Murguia who is undefeated and accomplished professional,” said Izmailov. “I’m having a great training camp with John David Jackson and working every day to be a world champion.”

Murguia, of Mission Hills, California, started amateur boxing in 2011 and went on to win the 2013 Junior World Team Open and become part of the Junior National Team. Blessed with excellent power and movement, the 24-year-old southpaw Murguia stands 6’ and was last seen winning the WBA Fedelatin Light Heavyweight Championship with a second-round knockout over Mexico’s 11-3 Hector Coronado.

“It’s an honour to be fighting for a belt like this,” said Murguia during a break in training, “and a great opportunity to fight a top contender like Ali. Winning this will put my career in a whole new position and a step closer to a world title shot. I’ve been working hard towards an opportunity like this and, come August 10, I will make sure I come out victorious and make my name known in the boxing world.”

“Izmailov vs Murguia is a fantastic fight of significance for the title between two undefeated light heavyweight contenders,” said eager event promoter Dmitriy Salita. “Both hungry, both wanting the victory badly… somebody’s ‘O’ has got to go. I am grateful to bring this fantastic fight to our Detroit audience. Detroit is on its way to being one of the hubs of professional boxing in the United States and it is fights like this that move the needle in a positive direction.”

Rounding out the action will be undefeated Houston-based light heavyweight Darius “DFG” Fulghum (2-0, 2 KOs), who will take on Delaware’s David Murray (10-3-1, 6 KOs) in a lightweight six and lastly, Hamilton, Ontario, Canada’s Spencer Wilcox (3-0, 2 KOs) will face an opponent that is still TBA in a lightweight six-rounder.