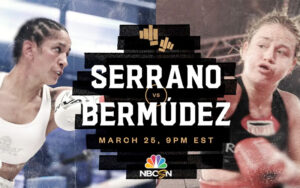 Born in Puerto Rico and now a resident of Brooklyn, New York, Amanda Serrano (39-1-1, 29 KOs) will return to the featherweight division to defend her WBC title.

The 32-year-old left-hander was active in 2020 with two dominant TKO victories, beating Simone da Silva on January 30, 2020, and then earning a first-round knockout over Dahiana Santana last December.

Serrano has captured nine titles in seven weight divisions from 115 to 140 pounds, while she has the honor of being the only Puerto Rican fighter in history to win world titles in more than four weight classes.

This will mark Serrano’s fourth professional fight in Puerto Rico and her first fight on the island in more than three years.

Bermudez (29-3-3, 10 KOs) of Rosario, Argentina, will move up the featherweight division for a chance to capture a world title in a third weight class.

In 2017, the 31-year-old captured her first world title, the WBO bantamweight title. In his most recent fight in December 2020, Bermúdez edged out Cintia Castillo to regain the IBF super bantamweight championship he held in 2018.

With 10 knockout wins on the record, Bermúdez has shown power to finish the fight in the last two years with four knockout in his last six fights.

This Ring City USA match will be televised in the United States and Puerto Rico on NBC Sports Network and the NBC Sports application.