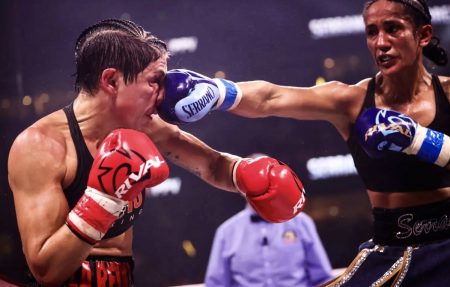 The most decorated fighter in women’s boxing history and consistently one of the most entertaining fighters in all of boxing, Amanda Serrano (42-1-1, 30 KOs) scored a dominating unanimous decision over gutsy Spaniard Miriam Gutierrez (14-2, 5 KOs). The judges scored the 10-round lightweight bout 99-90, 99-91 and 100-90 all in favor of the seven-division star Serrano.

“I think I belong in the 135-pound division,” said Serrano, who moved up from her August weight of 124 pounds. “I belong wherever they put me. I’m a true warrior. I’m a true champion. My power comes wherever I take it. You can see her face and look at my face.”

The Brooklyn-based Puerto Rican Serrano began the bout at a torrid pace, connecting on 37 of 86 punches thrown in the two-minute opening round. It looked like it could be a quick night’s work for Serrano, who unleashed a flurry of power punches on the up-against-the-ropes Gutierrez. However, Gutierrez showed incredible toughness and resolve to make it out of the round.

In the 10th and final round, Serrano did everything she possibly could to finish the incredibly tough Gutierrez, but the 38-year-old Madrid native ate shot-after-shot and still returned fire. Serrano threw 94 punches in the round, connecting on 38 of them.

“She’s a tough girl. She’s a big girl,” Serrano said. “Tonight, she’s probably 160 or 165 pounds. Honestly, I’m like 133 or 134 pounds, but it doesn’t matter to me. She’s a tough fighter. She did say she was in better shape this time than when she fought Katie Taylor because she had a year layoff. Now, she just had a fight last month that she won. I fought the best Miriam Gutierrez and I beat her.”

“This isn’t a sad or bitter loss, it’s a dignified one,” said Gutierrez, whose only other loss came against the aforementioned Taylor, the undisputed lightweight champion. “It was a war from the get go until the end. It’s been an honor.”

With the win, Serrano sets up a potential 2022 super fight with Taylor. “I’m ready for Katie,” she said. “I don’t think she’s as strong as Miriam, so I think I’m okay.”