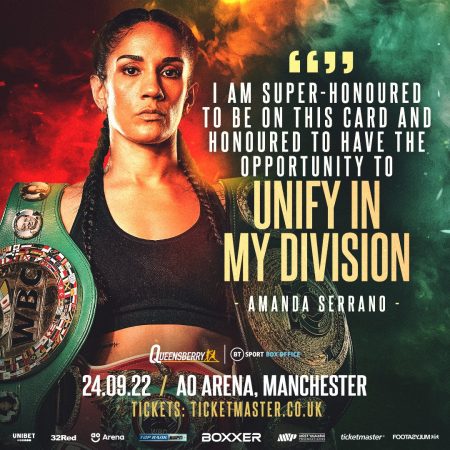 Boxing superstar and seven-weight world champion Amanda Serrano admits she was taken by surprise when she received the news that IBF champion Sarah Mahfoud was prepared to accept a unification fight that will take place in Manchester on September 24.

The Puerto Rican southpaw – based in Brooklyn – who holds the WBC, WBO and IBO world featherweight titles was set to oblige a WBO mandatory against Yamileth Mercado in August at Madison Square Garden.

The proposed show was ultimately cancelled, leaving the 33-year-old without a date, resulting in her management team hooking up with Queensberry to place ‘The Real Deal’ on the blockbuster Joe Joyce-Joseph Parker heavyweight card at the AO Arena.

Much to her delight, the undefeated Dane and IBF world champion Mahfoud chose to share the Manchester stage with her for a unification match.

“They are both tough fights, Mercado and Mahfoud, one was my mandatory with the WBO and one is a champion. Of course, you always want to fight the champions and I have been looking for this fight for a couple of years now, for her and the WBA, the two belts I am missing to become undisputed.

“I couldn’t believe that she took the fight, I was like ‘yes!’. Everything happens for a reason, the timing was great and she decided she wants to fight now, so let’s do it. It is in Manchester, my first time fighting over there and the UK fans are amazing and I just hope they come out and support the fight.”

Serrano admits that she has not intently re-watched her last fight, the epic clash with Katie Taylor that took place in New York back in April and delivered the best possible statement on behalf of women’s boxing.

“I kind of have, I have dibble-dabbled, but I always just see my mistakes, which is a good thing so you can fix it in the next fight.

“It was just a great night, a great event and I didn’t want to ruin it because we put on a hell of a show, both of us. There was blood, sweat, tears in the ring that night and the fans came out and supported us.

“You know what, I feel like you never lose, you learn and I feel like I never lost that fight. I am coming back to my weight class and I am back to where I feel comfortable at, at 126lbs, where I am strong and where I am champion.

“I am unifying and I feel like I am back in my division right now.”