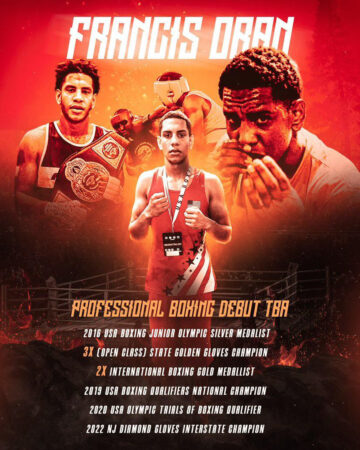 Amateur standout Francis Oran is getting ready to turn professional on January 20th in Bethlehem, PA.

Oran, who is the one of the most accomplished amateur fighters coming out of the State of Pennsylvania in recent years, had his dreams set on becoming a 2020 Olympian. Unfortunately, the pandemic happened and with that Francis dream became a mirage. The AIBA (Amateur International Boxing Association) canceled a lot of the Olympics qualifiers and Francis Oran was not able to chase his dreams of qualifying for the Olympics.

Now two years later, Francis has set his goals at becoming a World Champion at the professional level. The former amateur National Champion had set his sight on building a strong team around him to help him chase his goals. For his manager he chose Trifon Petrov.

“I’ve heard amazing things about Trifon Petrov. The work he has done with his other fighters speaks volumes. I’m extremely excited to be part of his team.” said Oran.

“I’m extremely excited to have the opportunity to work with Francis. I’ve followed his career for a long time, and I absolutely believe he has the skill set and determination to become a world champion.” said Petrov.

After signing with Petrov, the 24 year old Francis Oran inked a co-promotional deal with Marshall Kauffman of King’s Promotions and Tony Jeter of Jeter Promotions.

“I’ve known Marshall since I was a kid, I can’t wait to work with him. I’ve also heard only good things about Tony, he does big things in Maryland and also Pennsylvania. I feel that with Marshall and Tony in my corner I would stay very busy, and I can’t wait for that.” said Oran.

Marshall Kauffman, a Pennsylvania Hall of Fame promoter is also looking forward to working with Oran.

“I’ve known this young man for over 10 years and the sky’s the limit for him.” said Kauffman.

Tony Jeter of Jeter Promotions plans to bring Francis to his event in Maryland in February.

“Francis is an excellent fighter, he has all the tools in the box to have an extremely successful career.” said Jeter.

Francis is trained by Paul Pinnock. Pinnock has been with Francis from the start of his boxing journey, winning multiple national and international tournaments. Now they are looking to bring that same success into the paid ranks.