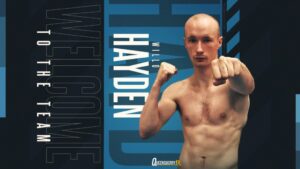 The 19-year-old from Crumlin has 11 Irish National titles to his name and also won gold at the 2016 European championships. Hayden, who will campaign at super lightweight, reports that he has had upwards of 300 amateur fights, including club shows, while also holding the remarkable record of being undefeated in 45 championship fights staged in his home country.

One decision did go against him, but the verdict was considered such an injustice that the authorities marked it down as a victory on his amateur card.

Hayden – “My name is William but I am becoming known as Willo and that is what Frank has taken to calling me” – intended to pursue senior experience before Covid-19 restrictions prevented amateur activity and resulted in major competitions being cancelled.

“I never got to fight at senior level, but I have sparred the seniors at my weight and I got the better of them, so I am very confident,” said Hayden, who is a product of Crumlin BC under Head Coach and two-time Olympian Philip Sutcliffe.

“I was preparing for the seniors before the pandemic kicked in and I also had the world championships lined up, but Ireland didn’t take part in the end.

“Staying in the amateurs would mean too much waiting around now and I am ready to get going in the pro game.”

He will embark on his professional journey with Hall of Fame promoter Warren in his corner and Hayden insists this represents the perfect scenario for his development.

“I am delighted with it,” said the big-punching youngster, who proceeded to explain how the connection came about. “If I had to choose any promoter he would always be my No.1.

“I was over in Portugal training with Conor McGregor in preparation for his fight with Dustin Poirier and cutsman Andy O’Neill was over there, who does Connor’s wraps. He was able to put me in contact with (Queensberry whip) Simon Legg, who got in touch with Frank and they were interested in promoting me.

“Andy and Connor come from the same club as me in Crumlin, so we are all fairly tight.

“Frank has a strong record with developing young fighters and that seems to be his strategy. He has got a lot of top young prospects who he is investing in to see how they turn out in the future.

“I think we are looking at six fights a year and that is what the aim is. I am delighted I am going to be busy and Frank is also going to get me over as often as he can for top quality sparring.

“I am also 100 per cent delighted over the prospect of fighting over in England,” added Hayden, before going on to describe what fans can expect from him when he steps into the ring as a professional.

“There have been loads of times where I have gone in aggressive then come out for the second round completely different and fought off the back foot. So I am completely adaptable, but I am mostly aggressive, come forward and strong.

“I will be exciting to watch.”

Promoter Warren added on his new Queensberry charge: “I am both delighted and excited to be adding Willo to our ranks. He was undoubtedly the finest amateur talent in Irish boxing and I am looking forward to him showcasing his ability on our shows and to a wider audience on BT Sport.

“We are continually looking to build young stars for the future and I am confident Willo possesses the application and natural ability to reach the very top of the sport. Much the same as with our other exceptional young fighters, our first job is to get him the experience he needs and he won’t be rushed.

“We will deliver the right fights for him at the right time and I am sure boxing fans will enjoy watching his development and progression towards title contention.”

Tickets on Sale Today for Josh Taylor vs. Jose Ramirez May 21 Devin Haney Training Hard Ahead of Jorge Linares Bout