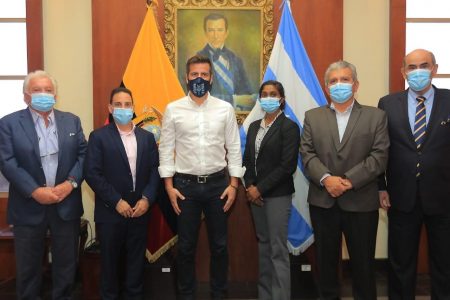 The American Boxing Confederation (AMBC) will host its elite continental Championships in Guayaquil, Ecuador from March 22 to April 2. The medalists in each of 13 men and 12 women weight categories are to receive prize money, $10,000 USD for the first place, $5,000 USD for the second and $2,500 USD for the third.

In late December, IBA and AMBC made a joint site visit to Guayaquil to check the work of the local organizing committee (LOC) prior to the event.

AMBC President Jose Laureano stressed that the LOC is made up of very professional people committed to the event.

‘I saw a lot of enthusiasm from all the government authorities and the LOC. Guayaquil has a great advantage for the event: hotels, hospital, competition stage and the airport are within a 7-minute radius. I am very confident that this event will be the beginning of American boxing in a big way,’ Mr. Laureano added.

IBA delegate, Sport and Development Consultant Ria Ramnarine mentioned that all efforts are made ‘to organize the AMBC Elite Continental Championships at a very high standard.’

‘The location of the competition and training venues, the hotels, hospitals and airport is ideal, and transport logistics should not be an issue. The hotels are very good, clean, have all amenities and follow the required Covid protocols. There will be two hospitals on standby, covering a wide range of services for the athletes and officials. The LOC has promised sufficient experienced volunteers as well. Just the competition venue raised some concerns as a lot of preparation work is needed, but the Venue Manager promised it will be ready,’ she explained.

Ecuadorian Boxing Federation President and IBA Board of Directors member Alex Gonzalez said: “The visit was successful as all the venues and hotels, as well as the logistics, were observed, taking a pleasant impression of the speed of the organization”. Mr. González also stated that the visit to Guayaquil of the authorities designated by IBA to carry out the inspection was very fruitful, highlighting the great importance of support from of the local authorities and thanked the President of IBA Umar Kremlev, for the support he is giving him so that the Championships reach the desired success, and that he feels that Ecuador is there to support all the activities of the AMBC.

‘During their tour, the delegation had the opportunity to meet with the Governor of Guayas, Pablo Arosemena, who is the representative of the President of the Republic in that province, whose capital is Guayaquil. It was a very warm meeting, in which the senior government official expressed his firm commitment to supporting the event and ensuring safety during its development, bearing in mind that boxing is his favorite sport. On that same day, they were received at the Guayaquil Mayor’s Office by their Sports Director, Carlos Álvarez, who gave them a warm welcome on behalf of Mayor Cynthia Viteri, given that she was out of the country. The aforementioned official reiterated his support for the organization of the event and stated that the Mayor’s favorite sport is also boxing’.

Mr. Polit added that several work meetings were held with the members of the LOC in the National Sports Federation of Ecuador and in the Guayas Sports Federation. Likewise, inspection visits were made to the selected venues, hotels and clinics. In these meetings, detailed information was received on the management of the pandemic, the high average of people vaccinated with two doses in Ecuador and the obligation of citizens to be vaccinated to access public and private areas.

‘After the visit and the satisfactory results of the visit, it can be anticipated that the progress for the organization of the event is going well, so it is desirable that the financing of the same can also be given, despite the limited time available for the realization of such an important event,’ Mr. Polit summarised.

IBA President visits Azerbaijan to discuss the future of boxing