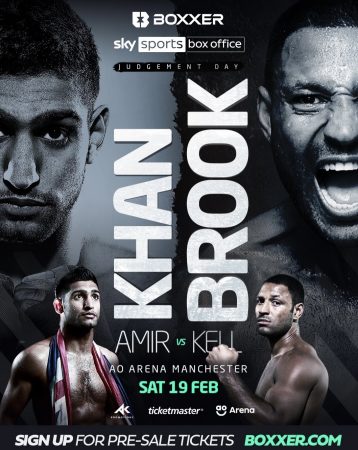 Manchester AO Arena, Manchester – 19 February 2022
Bitter rivals Amir Khan and Kell Brook will enter the ring on February 19, 2022 to square off in one of the most highly-anticipated encounters in British boxing history.

BOXXER and Sky Sports will formally announce the fight at a press conference in London this afternoon, with the news set to delight boxing fans who have clamoured to see the two antagonists do battle for nearly a decade.

The long-awaited encounter will take place in Manchester, with thousands of fans in attendance at what is certain to be a sold-out AO Arena.

“Khan and Brook are icons of the sport in Britain and this will be an iconic encounter. Their rivalry has simmered for years, they are still by far the best welterweights in the country and the eyes of the world will be on them when they square off in February to finally settle the question about which of them is the better man,” said Ben Shalom, BOXXER’s founder and CEO.

“This is a fight every boxing fan has wanted to see for years. It’s the biggest fight in British boxing right now outside of Anthony Joshua versus Tyson Fury and we’re delighted to be able to deliver this legacy-defining clash live and exclusively on Sky Sports Box Office.”

Adam Smith, Head of Boxing Development at Sky Sports, said “Amir Khan against Kell Brook is here at last and it’s going to be an unforgettable night when these two huge names in British boxing finally settle their long-running rivalry. Khan and Brook have been asked about this fight for a decade, despite their success as world champion, and now we will get the answer in February.

“Sky Sports has covered some of the biggest fights of both Khan and Brook’s careers, but this one is special. This is a heated feud which has simmered for years and there’s so much pride at stake. It’s a real 50-50 fight and we will find out in February who takes it!”

Tickets for this landmark moment in British boxing history will first be made available via an exclusive priority pre-sale.