Andrew Cain on the eve of destruction 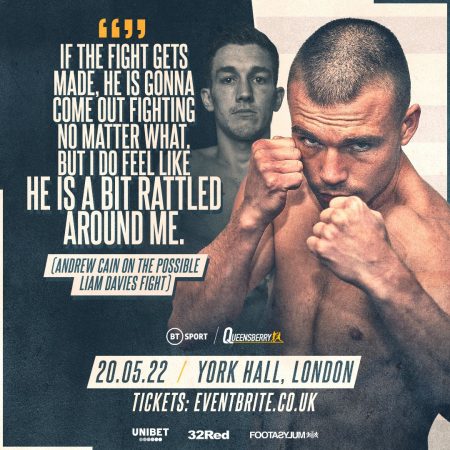 Andrew Cain will be looking to continue his trail of destruction at York Hall on Friday night and post-fight interviewers should be wary of mentioning the name of Liam Davies to the Liverpool firebrand.

Cain goes in with the tough Mexican Luis Moreno at the famous Bethnal Green venue in a defence of his WBC International Silver title, a matter of weeks after winning the belt with a speedy demolition of Pablo Ariel Gomez in Telford.

Gomez was a replacement for his originally scheduled opponent, Telford native Davies, who withdrew after injuring a shoulder and was on hand for media duties at the weigh-in.

Cain, who has said he is sick of having the name of Davies mentioned to him, did not particularly appreciate being confronted with his stricken foe in his post-weigh-in interview.

“Yeah, to be honest,” said the 9-0 KO-artist who suspects Davies is not entirely comfortable in his company. “What do you want me to do? Have a nice friendly chat with the fella? I think they were trying to provoke me to do something, but I just stayed nice and calm.

“Instead of just going over and knocking him out, I just tried to beat him up verbally.

“I think he is rattled in my presence anyway, that is what I feel anyway.

“Obviously he is a fighter and, if the fight gets made, he is gonna come out fighting no matter what. But I do feel like he is a bit rattled around me.

“Listen though, as I said after the weigh-in, my career doesn’t revolve around Liam Davies. I think he will lose his next fight and I believe that (Ionut) Baluta will beat Brad Foster, to be honest.

“I think I have got the beating of them all. (Marc) Leach is a bit runny and awkward, but I have been dealing with awkward southpaws since I was a kid so I feel like I wouldn’t have a problem with him at all.”

Cain admits he is prepared to bide his time to an extent when it comes to fulfilling his obvious potential and he suspects prospective opponents are already aware that a new force is on the horizon.

However, some super bantamweight match-ups might have to be put on the backburner for a little while because Cain is seriously contemplating a drop down to bantamweight.

“I ain’t getting any younger but I am also not in no rush. I am coming, I am coming regardless and they are gonna see me sooner or later and they are starting to now. There is no pressure on me and no urgency about it, it is just inevitable and it is happening.

“It is super bantam for this one, but I am probably going to speak to them to see if I can get my next one at bantam. I’ll probably need about five or six weeks to make the weight comfortably.”

So would Cain put a drop in division ahead of the big fights and belts in his current category.

“These are the decisions we have to make when it comes, but I feel like I would be better at bantam and would be the bigger man. Not that we’re bothered because we would fight anyone but we don’t want to give these fellas any sort of advantage over us, do we?

“I was walking around like a bantamweight and this is where the decision has come from. I am having to eat up to super bantam and that is why we know I can make it quite comfortably, although it is never easy.

“Any fight though, just give me the phone call and I’ll be there. We want to do what’s best for us and, at the moment, I think it is bantamweight.”