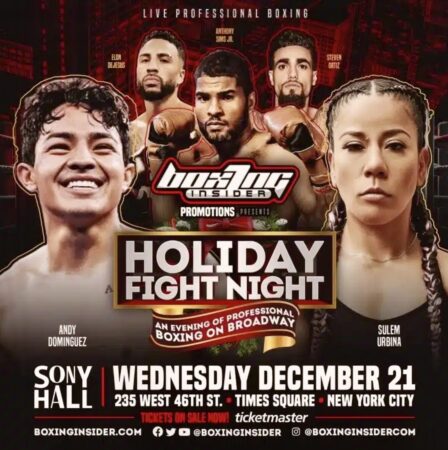 The Bronx’s undefeated Andy Dominguez will be the main event fighter for the first time in his young career in a fight card tabbed “Holiday Fight Night.” The event takes place Wednesday, December 21, just four days before Christmas, the best time of the year, at Sony Hall, in Times Square, New York City.

This will be BoxingInsider Promotions second fight card. Their first, on October 13, also at Sony Hall, had a raucous standing-room-only crowd.

Tickets for “Holiday Fight Night,” priced from $85 are available at Ticketmaster.

“This is the best present – to be back home fighting in New York City for the holidays, in front of my family, friends and fans,” said Andy Dominguez. “I plan on giving them another exciting fight.“

“I’m real excited for this bout,” said Anthony Sims Jr. “It’s my first time fighting as a middleweight and first time fighting in NYC – and in Times Square – that’s real old school. I love that. I’m ready to show off my skills and win over some NY fans”

“I’m very excited to be back in ring against a durable veteran fighter like Andrew Rodgers,” said Ortiz. “Fighting in one of the biggest fan-based boxing cities just four days before Christmas will make this a special victory. I’m taking this fight very seriously, working hard in training camp away from my family. I am determined to look sharp and impress. I hope Rodgers is ready because I am coming with a vengeance.”

“I’m looking forward to coming to New York as it has been a dream of mine to fight there,” said Sulem Urbina. “Indeya Smith is a good fighter. She’s fought great opposition and she’s rugged. I just know I am there to win and this will be my Christmas present.”

“Excited is an understatement,” said de Jesus. “To be fighting in New York for the first time in my professional career & what a better time to be here, to put on a show for my family and friends during the holiday season! Look for an exciting fight as I aim to climb the ranks and make a name for myself in my division.”

Andy Dominguez (8-0, 6 KOs) from The Bronx and born in Mexico, knocked out his last opponent in the first round in front of a boisterous standing room only crowd gone wild that included many of his family and friends. It was Andy’s fourth knockout win in a row. Andy turned pro in August 2020, in a bubble event during the pandemic peak. Dominguez will fight fellow flyweight Gilberto Mendoza (19-13-3, 10 KOs) from Modesto, California in a bout scheduled for eight-rounds.

Anthony “The Magician” Sims Jr. (22-1, 20 KOs) born in Indianapolis now residing in Los Angeles made his pro debut on April 9, 2014, following a stellar career. He rolled through his first twenty bouts which earned him a January 30, 2020, WBO Latino super middleweight title fight, which he lost by split decision. He would rebound in his next fight, winning the WBA Intercontinental Super Middleweight title on August 13, 2021 with a ninth round stoppage. On December 21, Sims Jr will fight Anthony Todd (14-6, 8 KOs) from Atlanta, GA in an eight-round middleweight bout.

Steven “Hit Man” Ortiz (12-0, 3 KOs) born and raised in Philadelphia, made it to the Gold Gloves national semi-finals in 2014 before turning pro in February 2015. Through his first six professional fight he had lost a total of one round on only one judge’s scorecard. On February 23, 2019, Ortiz won the Pennsylvania State Lightweight title, knocking down Jeremy Cuevas twice en-route to a unanimous decision victory. On December 21, Ortiz will battle Andrew Rogers (7-10, 2 KOs) from Elkhart, Indiana in an eight-round lightweight bout.

Sulem Urbina (13-2-1, 2 KOs), born in Mexico now living in Phoenix, Arizona began her boxing life fighting at the Oxnard PAL as an amateur. She began her pro career in 2016 and won her first twelve bouts (with one no contest mixed in). Her first loss, on October 30, 2020, came against who is now Unified World Champion and Ring Belt Champion Marlen Esparza, against whom she lost a unanimous decision. On July 9, 2021 Sulem fought WBA Flyweight Champion Naoko Fujioka and lost a majority decision. On December 21, Sulem battles Indeya Smith (5-6, 1 KO) from Dallas TX in an eight-round super flyweight bout.