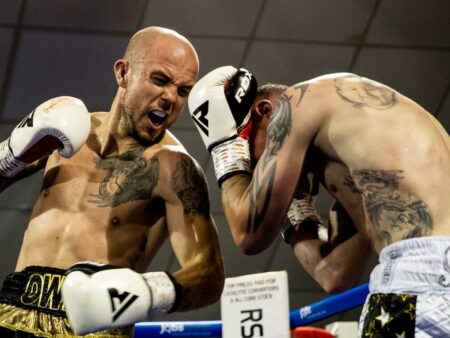 At the top of the bill there was redemption for Wolverhampton’s Andy Owen who returned to the scene of his first, and only, professional loss. Owen was stunned by Norbert Szekeres at the same venue in September but boxed well to put that defeat firmly behind him as he out-pointed Walsall’s Kearon Thomas.

Owen started well and put Thomas on the back foot. Credit to Thomas though, who moved out of range and made it difficult for Owen to land in the early exchanges. Owen began to walk Thomas down as the fight progressed and picked his shots well. Referee for the evening, Shaun Messer, scored the contest 40-36 in Owen’s favour.

Telford’s Bradley Thompson survived a scare when he seemed to dislocate his shoulder temporarily midway through his four round contest with Spain’s Alejandro Torres. The 20 year-old, brother of English Champion Liam Davies, was boxing well and going through the gears when his shoulder seemed to pop out as he threw a jab.

Taking to the sanctity of the canvass, Thompson looked in real pain but his shoulder popped back in and, whilst clearly giving him plenty of discomfort, managed to box with his backhand. He admirably got through the contest to record a 39-37 win.

Bloxwich’s Lewis Morris also moved to 2-0 as he beat Josh Anderson again over four rounds. Morris, a stablemate of Owen, is trained by Richie Carter from Wolverhampton Boxing Club and was in control against his Birmingham-based opponent. Credit to Anderson though; he came to have a go and Morris will have learnt plenty from the contest, which he won 40-37.

Birmingham’s Paul Holt completed the four-card show as he made a welcome return to the home corner for the first time in some three years. Boxing well and looking fit and sharp, Holt defeated Shrewsbury’s Luke Merrifield 40-36.

BCB Promotions are back in action in December with a host of shows. More details can be found at bcb-promotions.com.