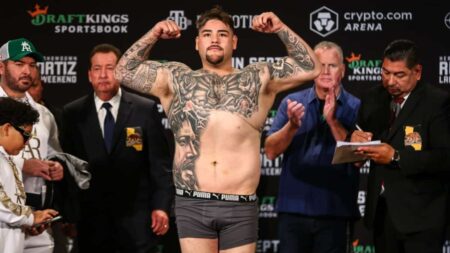 Andy Ruiz has just turned 33 and has three or four years left in professional boxing, with four rivals he wants to face before retirement and a dream goodbye fight at the Azteca stadium.

Don Andres Ruiz, father of the Destroyer, has talked with his son about the plans of the former world champion and has already touched on retirement.

But first he has important fights to make and already knows the rivals he wants: Tyson Fury, Deontay Wilder, Anthony Joshua and Oleksandr Usyk. “Andy has good fights left,” said his father in an interview with IZQUIERDAZO.

“Fury, the trilogy with Joshua, Usyk, Wilder and retiring with those fights, that’s what we want to do”. And after those events, Mexico would be the target for a goodbye contest and thus close his sports career. “I tell him that they are the fights that he has to do, nothing more and that’s it. And make a last one in Mexico”, he reiterated.

Asked if he has already talked with Andy and the boxer concurs, he assured that he did. “He agrees with me, with the decision that I tell him”, said Don Andrés Ruiz, also the Mexican – American boxer’s agent.

Andy Ruiz has in mind the contenders he wants to face before retirement that they would look for in the Azteca stadium. After not being able to perform in Mexico last June, due to a contract with PBC and his challenge vs. Luis Ortiz, Don Andrés’ dream for Andy is to retire in Mexico.

“We want to fight in Mexico”, he said. “Make one (big fight) in the Plaza de Toros bullring or in the Azteca Stadium to retire… (If I had to choose) I want to do it in the Azteca”.

Their main goal is to make his last fight in that venue, but they are also open to the possibility of fighting elsewhere, or in Mexico, against a contestant they have in their sights: Dillian Whyte. If a fight with Wilder, or one of the world champions could not be arranged, they would seek for the British to celebrate in Mexico.

“In case one of them doesn’t want to fight we want to take Dillian Whyte”, he concluded. “In Mexico it would be a good fight”. Andy Ruiz made history in June 2019 when he dethroned Joshua for the WBA-WBO-IBF heavyweight titles, which he lost six months later in a rematch.

Now he is looking for the WBC title that Fury holds, with whom he would like to face and if it is on the weekend of May 5, 2023, much better, Mr. Andres Ruiz said.