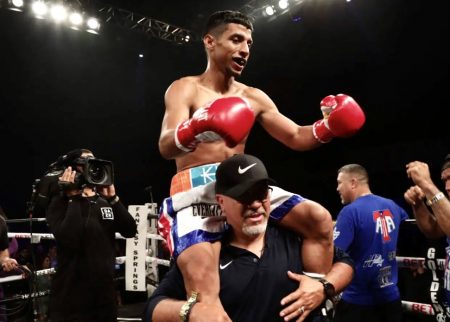 Fight fans were treated to a night of action as former world champion and fan favorite Angel ‘Tito’ Acosta (23-3-1, 22 KOs) of San Juan, Puerto Rico, defeated fellow countryman Janiel Rivera (18-9-3, 11 KOs) of Matani, Puerto Rico, via first round knockout at the 1:19 marker of the round. The duo were scheduled for a 10-round super flyweight fight and headlined the second installment of Golden Boy Fight Night on DAZN.

The fight featured the only knock-out of the night in a fight card where all the fights went the distance, streamed live on DAZN and the Golden Boy Boxing YouTube page and hosted by Beto Duran and Boxing Hall of Famer Bernard Hopkins.

“I always train well for every fight, we knew Janiel was going to be a strong fighter and I didn’t want to under prepare for this fight,” said Angel Acosta. “I saw an opportunity to end the fight early and I took it. I had a great camp with Joel Diaz and I feel he got me ready for this. Naturally we trained to go the distance, but fortunately we ended it early and got a great victory. We want to go back to the gym train and look for another world championship shot, hopefully Julio Cesar Martinez or McWilliams Arroyo.”

In the exciting co-main event of the night, Victor Morales (16-0-1, 8 KOs) of Vancouver, Washington, dominated Alberto Torres (11-5-3, 4 KOs) of Sacramento, CA, in their scheduled 10-round featherweight fight. Morales established his dominance early on as he pursued Torres around the ring. In the fifth round, Torres hit the canvas, ruled a slip by the referee but overturned by the judges. Morales, however, did not lose momentum as he continued to land shots with his left jab and delivered effective combinations. An accidental headbutt in the ninth round by Morales caused a time out, but also opened up a cut on the top of Morales’ right eye. With blood flowing from the wound, Torres sought to take advantage of the moment and tried to hit Morales on his right side. The lost round had both fighters giving it their all, in a crowd pleasing last round that saw Torres hit the canvas for the second time. The judges ruled in Morales favor via unanimous decision with scores of 100-88 from all three judges.

“I felt great, I was in great condition, and I felt like I dominated the fight,” said Victor Morales. “I was enjoying myself. I could’ve gone 15 rounds. Opponent was an awkward southpaw, but I broke him down and let my hands go. I felt the head butt. I was hoping it was him that got the worst of it, and then shortly realized it was me, but that’s boxing especially when you’re fighting a lefty. But overall I feel great about my performance today.”

Los Angeles’ Rudy “Tiburon” Garcia (13-0-1, 2 KOs) took on veteran Diul “Elegante” Olguin (15-23-5, 10 KOs) of Guadalajara, MX in an 8-round super bantamweight fight. Olguin was able to show his experience in the ring, giving Garcia a very tough fight. A hedbutt by Olguin in the fifth round caused a time out and opened up a wound on Garcia’s nose. A lively seventh round saw Garcia throw good combinations as he cornered Olguin against the ropes. Ultimately the fight was decided by the judges with scores of 79-73, 80-72, and 79-73, to award the victory to Garcia via unanimous decision.

“I knew the fighter was going to be tough,” said Rudy Garcia. “He has a lot of experience and I had to adjust because he kept coming in with his head. Obviously, I got a head butt that stung me so we had to adjust mid fight and got the decision. I had to go back to the amatuer mentality and outpoint him.”

Nicaragua’s Jimmy Brenes (2-0, 1 KOs) fighting out of Hialeah, Fl., participated in a 4-round welterweight fight against Hector Perez (0-1-1) of Inglewood, CA. The lively 4-round fight kept the fans actively engaged as they cheered on their favorite fighter. Perez hit the canvas in the third round but was ruled a slip by the referee. The action was non-stop throughout the fight with judges awarding the close victory to Brenes via majority decision with scores of 38-38, 40-38, and 40-38.

“Perez gave me a good fight, he came to do what he needed to do. I came in and did what I needed to do to win and I am happy the judges also saw it my way. I know I still have a lot to improve and that’s what we are going to do. We are going to go back to the gym, train, and get better; that’s how world champions are made,” said Jimmy Brenes.

In the opening fight of the night, Hollywood, Florida’s Eric Tudor (4-0, 3 KOs) took on Donte Stubbs (6-5, 2 KOs) of Riverside, CA in a scheduled 6-round middleweight fight. In the early rounds of the fight, both fighters were busy trying to establish the pace of the fight, keeping their distance and utilizing their jabs. Tudor’s power punches began to wear down Stubbs as the fight wore on and the judges awarded the victory to Tudor via unanimous decision with scores of 60-54 from all three judges.

“I am happy that I was able to dictate the pace of the fight and we are fortunate for the outcome,” said Eric Tudor. “We knew he was going to be a tough fighter, my job was to just maintain my composure. He did get me with some shots that I wasn’t supposed to get hit with. I am very happy with my performance, like I said I was able to keep my composure and I am glad we were able to go the distance, that’s what we train for.”