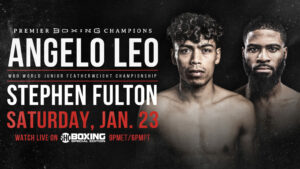 “I’m not surprised at all that Vegas has Fulton as the slight favorite. I know that he has a lot of supporters. I’ve been an underdog before. I’ve been in these shoes before, so it’s no surprise to me. It just gives me more fuel for the fire. I’m not at all offended that he’s the favorite. This is boxing and Fulton is a good fighter, but I’m looking to prove on January 23 that I’m where I belong and that I’m world champion for a reason.

“I’m known for throwing a lot of body punches and for my pressure. That’s no secret. I feel like people haven’t seen all of me yet. I have a lot to prove. I still have a lot of looks to show and come January 23, I think Stephen Fulton will bring that all out of me. I think it’s important, in every fight, to go to the body. Like they say, go to the body and the head will fall, but if he wants to move around and put pressure, I have a remedy for all that.

“Floyd [Mayweather] has been in my ear, solidifying the game plan with me. He’s been telling me exactly what I need to do to win this fight. I saw him quickly on Monday. It was brief but he just stopped in to say hello and see how I was doing.

“Being champion is something that I always wanted to be so now that I have the belt, I have the confidence I need. But I don’t take my foot off the gas just because I’m champion. They say that once you’re champion, it’s actually harder. As bad as you want it, now everybody else wants it just as bad as you do. My mentality is the same now that I’m world champion and I’m gunning for more world championships. I’m not the hunted. I’m still hunting.

“I’m going to show Stephen that it’s different when you get in the ring. There’s a lot more factors that play out. Not just pressure. Not just body work. There are a lot of things I have up my sleeve that a lot of people haven’t seen yet and I’m going to showcase all my skills on January 23.

“Johnny Tapia is the pride and joy of Albuquerque. He’s one of the greatest fighters from that city and to be mentioned with his name is an honor. Johnny Tapia was a good person, very charismatic and he showed everybody love.

“This fight is great for boxing. You have two undefeated fighters, both in their prime – what more do you want from two fighters in this boxing era? This is the marquee fight right here. This is the fight fans want to see.

“With this performance I want to let everybody know that I’m here to stay. I think a lot of people are doubting me just because I fought Tramaine Williams and they say he just had three days’ notice. But he was getting ready for a fight as well. I have a lot of doubters that I want to prove wrong and in this fight, I think I’ll have the opportunity to.”

“January 23 is going to be fireworks. Leo is the champion and has that spark and fire. We’re both coming hungry and prepared to make this a great fight. This fight is actually a bit underrated because we’re smaller guys, but we’re both in the top five of this division. Leo and I both have something to prove and I’m ready to get it on.

“I don’t think the layoff will affect me at all. I think it makes me even more ready. I can’t wait to get in the ring and get back to doing what I love.

“My game plan remains the same as if I was fighting him in August. We’re always ready to make adjustments, but I believe I’m much better than if I had fought in August. From losing that opportunity and now coming back, it’s made me better physically, mentally and emotionally.

“Going through the experience of having the fight against Leo cancelled just changed my mindset. I felt like I lost everything. It made me train even harder. I took that rage and anxiety and used it every day in training. I’m just ready to fight.

“To me, it means everything to be a world champion from Philadelphia. This is what I’ve been working for my whole career. To my city, it would show people from my neighbourhood that there’s a way out. But I don’t feel any pressure because of it. This sport teaches us the discipline to perform in moments like this. The pressure is just a part of my job.

“My streak of taking fighters’ ‘0’ is going to continue on January 23. Fighters have their thing that they’re known for: Gervonta Davis knocks people out, Chris Colbert shows off his flashy skills, and I take fighters’ ‘0’s. Come fight night, we’ll both be prepared and ready. I’m ready to put on a show and I believe Leo will be ready to do the same.

“I’m one of the guys leading the new era of Philadelphia boxing, but I can’t get ahead of myself. I just have to stay smart, calm and do my job. It’s all about doing what I came there to do.

“I am that next wave and I’m just ready to stamp it by getting this belt. I’m going to solidify what everyone already knew about me. I have the superstar quality in me and I’ll show it in this fight.

“Leo’s performance against Williams was what I expected. I knew he was going to come forward and be a dog, but I don’t think Williams expected it. He’s a good fighter, he earned his way here, and now we just have to fight.”

“In this main event we have a highly anticipated fight that the fans have been waiting for since it was first announced. This is a meaningful fight for the 122-pound division. This is one of the hottest divisions in boxing, with a number of fighters that you can mix and match to make numerous great matchups.

“Angelo Leo is coming off a tremendous victory to win this title against Tramaine Williams. That was his coming out party. He was really impressive and made a big statement. When it comes to Fulton, you know he doesn’t lack confidence. He’s young, undefeated, talented and he feels like this will be his easiest payday to date. He believes he’s going to walk through Leo.

“This main event has two young undefeated fighters facing each other in their primes. That’s what makes a great fight. It’s also interesting that Fulton is actually a slight betting favorite, despite Leo being the champion.

“We open the telecast with Mayweather Promotions’ own Rolando Romero. ‘Rolly’ is coming off a less than impressive performance when he won the interim title, so he’ll be looking to make a big statement for fans. This is going to be a great card from top to bottom and we can’t wait.”

“You won’t find many young fighters that have been against as much impressive competition as Stephen Fulton has. Seven of his victories out of his 18 wins are over undefeated fighters. It’s very impressive. He’s coming to grab what he believes is his and what should have been his back in August.

“The co-feature is the fight I’m really excited about with Ra’eese Aleem and Victor Pasillas. This is a very important matchup with very legitimate contenders. A 50-50 fight between two undefeated prospects in the hot 122-pound division. Both fighters have made it clear that they want the elite of the division and they are willing to put it all on the line January 23 to make that happen. The winner of this fight will be in the driver’s seat for any of the 122-pound champions.

“In the opener, they say styles make fights and Justin Pauldo has a style that could really give Rolando Romero some fits. He’s got a great jab and he’s in great shape and down in Houston training with Ronnie Shields. He’s coming to win. Out of the six featured fights we have only one loss between them, so we are going to see some ‘0’s go on January 23. We’re looking forward to it.”