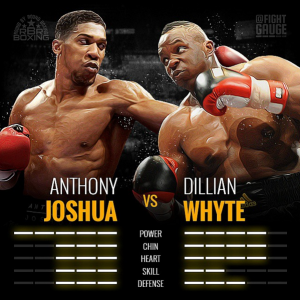 Joshua and Whyte have been back and forth with their ‘choice words’ ever since their showdown in December of 2015, which saw Joshua victorious with a convincing seventh round knockout.

“If he does that, he might get a box, there and then, one box. He thinks it’s a game, but I don’t play games with these guys. They think it’s a game, scream and shout and get in each other’s faces, but if he does, he will get a box.”

“I don’t know and I don’t really care what he thinks or what he believes. I don’t know, it’s hard to say. He says one thing one day and the next day he says something else. There’s no consistency with AJ,” Whyte said.

“There’s no consistency with him. He says this, then he says that. He just talks a lot of crap. I’m sick and tired of all these guys that’s talking, talking, talking all the time.”