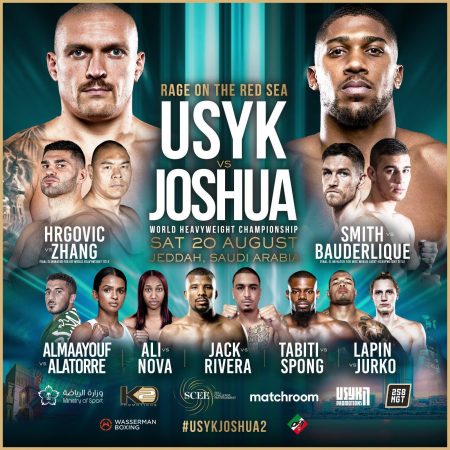 Anthony Joshua feels he’s not recognised as a “dominant heavyweight” in the US due to meeting the Queen.

The former two-time world champion made the comment in Official Partner JD’s ‘Road to Redemption’ interview with Savage Dan, where Joshua looked ahead to his rematch with Ukrainian Oleksandr Usyk.

When asked if he felt underrated in the boxing world, AJ said: “When I came into this division it was whack and I thought ‘let me get in this game and take on anyone and everyone, it doesn’t matter who’.

“Maybe it was because I was British that nobody was respecting my thing.

“I wanted to bring the heavyweight division to Great Britain and show that we are solid.

“Because I think that sometimes people just think we drink tea and eat biscuits and sit with the Queen.

“I felt I was not getting looked upon as someone who was a dominant force in the heavyweight division.

The 2012 Olympic champion went on to add that there’s a “level of hate” directed at him because of an assumption that his success has been “handed to” him, AJ said: “To a degree, because probably of what I’ve achieved and how I’ve used my intelligence and brain outside (the ring) – I think there’s this assumption that it’s kind of been handed to me.

“There’s not a level of hate but you can call it that.

“At the end of the day, I’m a very strong-minded person: I know once it’s all done, for me, it’s done.